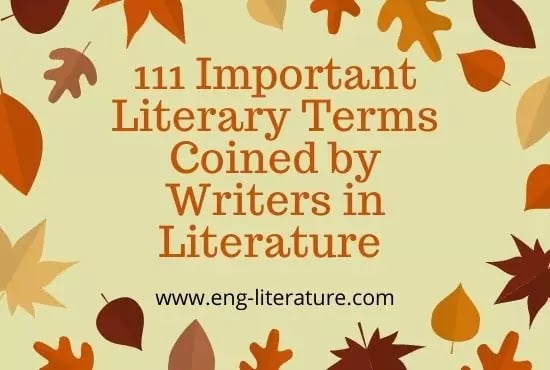 In this article I am going to light upon some important literary terms which are frequently used in English Literature and their inventors (who actually coined those terms). Hopefully this list will definitely help you to brush up your knowledge for different competitive exams:

2. Dissociation of Sensibility by T.S.Eliot

3. Willing to Suspension of Disbelief by Coleridge

19. Horizon of Expectation by H.R.Jauss

26. Theatre of Cruelty by Jerzy

28. Theatre of Oppressed by Augusto Bal

30. The Guilded Age by Mark Twain

40. The wasp of Twickenham by Pope

42. Chaucer of Scotland is William Dunbar

46. Theory of Population by Malthus

48. Egotistical Sublime is to William Wordsworth

51. Sprung Rhythm and Curtal Sonnet and Inscape and
Instress are by G.M.Hopkins

53. Light of Asia is Admin Arnold

54. Only Connect by E.M.Forster

55. Sports of Time by W. Wordsworth

61. Langue and Parole by Ferdinand Saussure

63. Difference and Defferecnce by Derrida

67. Competency and Performance by N.Chomsky

68. Readerly and Writerly Text by R.Bathes

69. Ironic and Indexical by C.S.Pierce

74. Simulacrum or Simulacra by Jean Baurdrillard

79. Theoretician of Sociability is Malcolm Braburry

92. Theatre of Absurd by Martin Esslin

98. Stream of Consciousness by William James

If any term is left don’t forget to mention in the comment section.