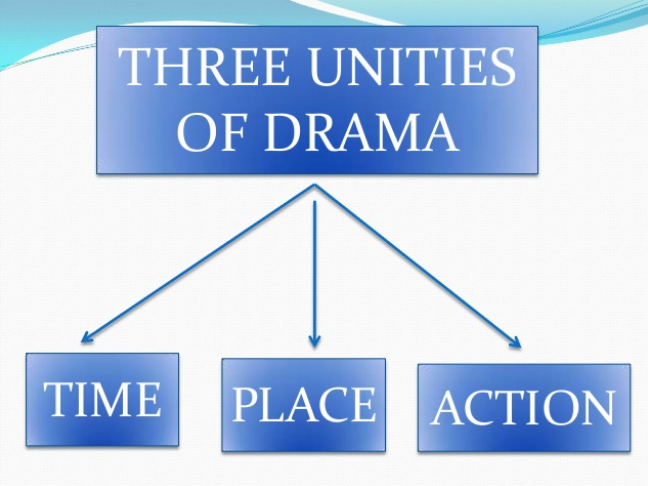 Classical Greek and Latin dramas were strict in form. The concept of the three unities, in relation to classical drama, derives from Aristotle’s Poetics but is not directly formulated by the Greek philosopher. He merely states that a tragedy should have unity of action.

The Poetics was unknown in Western Europe during the Middle Ages. During the Renaissance a Latin translation is published in Italy, after which there is much discussion of classical literary principles. However it is not until 1570, in a book by Lodovico  Castelvetro, that the concept of three unities evolves:

It was said that in drama there should be no change of place, and even if the scene changes it must not be too great a distance.  A public square or palace courtyard would usually serve this purpose well. But the plays of the Elizabethans incorporate scenes of various places and action and their plays moves from one city to another city, from one country to another.

It is the unity of action which makes the plot intelligible, coherent, and individual. The events and incidents are connected with each other logically and inevitably on the principle of probability; they move towards a common goal, the Catastrophe, aimed at by the dramatist. The plot must have “a beginning, a middle and an end”

Dr. Jonson in his Preface to Shakespeare rejected the “three unities”. However in England, the unities of time and place are optional device for the playwrights. An example of modern plays composed strictly according to the unities is TennesseWilliams’ Cat on a Hot Tin Roof.