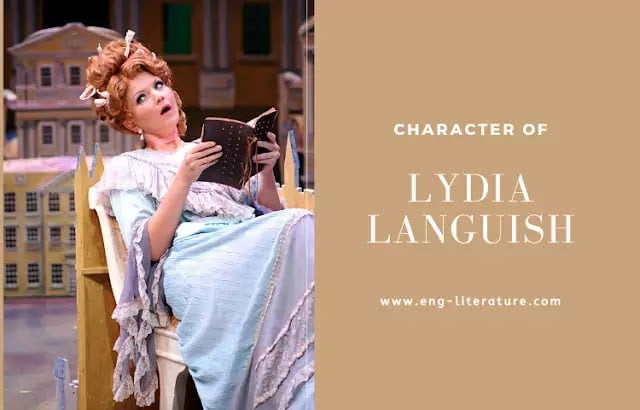 Miss Lydia Languish is the heroine of the play, The Rivals and is exactly what her name suggests, a silly romantic being, languishing in her comfortable sofa longing for secret marriage and elopement. She has a distinct tendency towards what is called sentimental tenderness. She is portrayed as a whimsical lady who lives in her own dreamland. Since she has romantic inclinations, she is always with thoughts of romantic adventures and escapades in relation to love and marriage. She has beauty and wealth, that bring a number of gallant lovers round her like a swarm of flies but she is a lady of peculiar tastes.

Lydia: A lady of a singular taste

At the very outset, Fag describes Lydia as a lady of “a very singular taste” and as a lady who likes her lover better as a half pay Ensign than if she knew he was son and heir to Sir Anthony Absolute, a rich baronet. Her peculiar conception of love and marriage arise out of her excessive reading of cheap romances and novels. Talking about her wealth, Fag says, “She has a lap-dog that eats out of gold; she feeds her parrot with small pearls, and all her thread papers are made of bank notes.” Thus, we get an impression that she is exceptionally wealthy together with having an odd or singular taste as far as love is concerned.

Lydia: Her idea of love

Her idea of love includes all thrills and sensations–the secret love affairs, the marriage without the guardian’s consent, elopement the news of it in the papers, forsaking the inheritance due to compliance of the guardian in the marriage, and consequent idealisation of poverty in which to live with her lover. These are the imbecilities of a spoilt child, that Lydia is to her bones. And it is to gratify these whims that Captain Absolute feels compelled to assume the character of an Ensign. And, when Beverley’s true becomes known to Lydia, she feels terribly disappointed. She is highly disappointed to think of a routine marriage in a church. She nostalgically recalls her secret meetings with her lover in the cold January nights when he used to kneel to her in the snow and used to squeeze and cough in such a pathetic manner. This is further proof of her foolish sentimentality in love.

She poses a problem in her rebellious nature to Mr. Malaprop. She is never able to reconcile herself to the ideas and views of her guardian-aunt. First of all, her foolish copy-book romances lead her to self made troubles, since neither her aunt nor Sir Anthony approves of it. She does not want to abide by her aunt’s wishes who wants to marry her to a rich man in accordance with conventional ideas. Therefore, when Mrs. Malaprop asks her, in Sir Anthony’s presence, if she will promise to forget her lover who is a fellow “not worth a shilling”. Lydia says point blank that she can never forget him. Her rebellious nature is seen even when she turns her face. So that she does not have to see her new suitor.

The fact that Lydia is unable to see her own absurdities while she can perceive the absurdities of Faulkland and Mrs. Malaprop, is highly contradictory, capricious, whimsical and jealous man while she herself was in a possession of all these qualities. She does not realize her flaws and in turns makes fun of Julia’s gratitude towards that man for having saved Julia’s life from drowning. Similarly, she can see the contradiction in Mrs. Malaprop’s falling in love with Sir Lucius, but is unable to see that her own romantic notions about love and marriage are whimsical and capricious.

The fact that she reconciles herself at last to a prosaic marriage shows that she has genuine love for Captain Absolute after all. The truth was that, her foolish romantic notions and light heartedness never gave an opportunity to her to find that out. It is only when she rejects him, that she starts realizing his worth and her own love for him. In the end, the news of the duel and the danger to Captain Absolute’s life touches her heart and she at once fully understands her own love for him. On hearing the news of the duel, not only does she start impatiently for the place of the duel, but she also prepares herself in the way for the reconciliation which comes directly and smoothly.

Lydia: Her importance in the play

As we all know, Lydia is the female protagonist of the principal love-story in the play and, so is indispensable to it. Beside this important role as the heroine of the love story, she also contributes her share to the comedy in the play by her absurd romantic notions. Lydia’s role was no doubt, intended by the author to be a target satire in the play.  Another purpose that Lydia serves in the play is that, she offers a contrast to Julia, who is the heroine of the other love-story.

On the whole, we can say that to Mrs. Malaprop, Lydia poses a problem in her rebellious nature; to Captain Absolute she is an enigma, because he has after all to reconcile her to his true self of an heir to Sir Anthony. Although, she is depicted as a capricious, whimsical person, living in her own world, she gradually wins the love of Absolute, and the sympathy of all, including the audience.