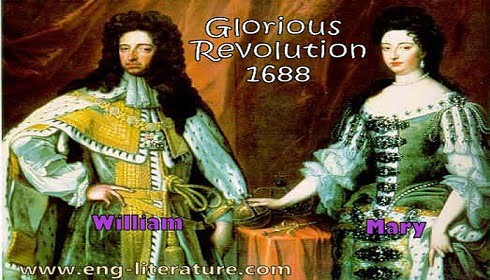 What is glorious Revolution?

The Revolution of 1688, often referred to as the ‘Glorious Revolution’, terminated the reign of James II and ushered in the reign of William III and Mary II. It established the joint monarchy of James II’s protestant daughter Mary and her Dutch husband, William of Orange.

Why the ‘revolution’ is called ‘glorious’?

The Revolution is glorious in three ways: firstly, because it was accomplished without bloodshed and violence, secondly because it secured the triumph of parliamentary government over kingly despotism, thirdly it was a defensive revolution. No drastic changes were introduced. Only ancient constitutional principles were reaffirmed and ratified.

Cause of Glorious Revolution

An undercurrent of tension between king and parliament ran deep throughout the 17th century. In the 1642s, the dispute turned into civil war. The loser, Charles I, was beheaded in 1649; his sons, Charles and James, fled to France; and the victorious Oliver Cromwell ruled England in the 1650s. Cromwell’s death in 1659 created a political vacuum, so Parliament invited Charles I’s sons back from exile, and the English monarchy was restored with the coronation of Charles II in 1660.

The Restoration, however, did not settle the fundamental questions of power between king and Parliament. Indeed, exile had exposed Charles I’s sons to the strong monarchical methods of Louis XIV. Charles and James returned to Britain with expectations of an absolute monarchy justified by the Divine Right of Kings, so tensions continued during the reigns of Charles II (1660-1685) and his brother James II (1685-88).

Through his actions James II lost all support from the parliament. The Test Act was passed during the reign of Charles II. It required that every person who wanted to get Civil or Military Post must accept the Anglican Church and its principles.  But James was a Catholic Christian while most members of parliament were Protestant Christians. He removed Protestant officials and people from the army and the church and replaced them with Catholics. He also suspended laws that the parliament had made because he believed they were unfair to Catholics. He tried to introduce his own laws which were more tolerant of Catholics.

James II wanted to space Catholicism in the universities also. For instance, the principal ship of Magdalene College of Oxford University was vacated and one James Parker a catholic was appointed. Thus James alienated the sympathies of the learned people also. Seven members of Whigs and Torrey invited William and Mary to take over the throne. Instantly they grab the opportunity.

The Declaration of Bill of Rights was the main result of this revolution. It had following significant features:

So sum up about Glorious Revolution, what Ramsay Muir says,

“Such were the extremely modest legal changes whereby Parliamentary supremacy and religious liberties were establi­shed in England.”