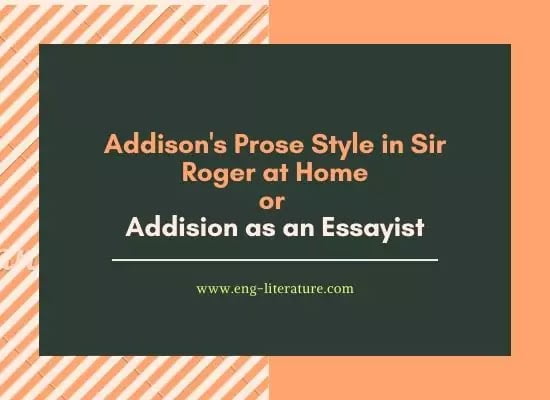 Joseph Addison was a great essayist, a philosopher social reformer and a critic of his age. He followed prose style which was a class by itself and also which made his essays smooth and graceful. J.H. Fowler rightly opined the Addison and his friend Steele could rightly be regarded as the founder of modern English essay and modern English prose, and “the larger share of achievement was Addison’s.”

Addison had invented an independent style which Dr. Johnson called the “Middle Style.” Clarity in subject matter, simplicity in construction lucidity in structure, absence of obscurity, free from rigidity are the hallmarks of Addison’s prose style. He never wrote too much decorated sentence. With great care and scrupulosity he avoided the lapse of composition, low words, slang words and the words of common use the colloquial words.

It was his excellent style as an essayist that Addison never depended on any particular theme for his essays. Popular superstitions, ignorance, vices, caprices, pursuits, fashion were all infused into his essays and Addison had represented them very nicely. He was aiming at castigating those vices and follies which were below and beyond the very cognizance of law and the pulpit.

Perfect character portrayal was the remarkable virtue of Addison. In his present essay, Sir Roger at Home. Addison has drawn a life-like character Sir Roger de Coverley with immense care. While we go through the essay we can easily imagine and even can see the old eccentric country gentleman in his homely nature — how he received his particular friend, Addison : how he kept his guests at ease by allowing them to do thing according to their whim and caprice: how much he loved his servants who were also aged like their master : how he kept old house dog and horse with great care and tenderness though they were useless – and many other pictures along with Sir Roger‘s dispositions, his likes and dislikes were represented minutely and shrewdly.

Addison‘s principal literary gifts – a delicate taste, a keen sense of humour an insight into character – are all united in the portrayal of Sir Roger de Coverley. Though Sir Roger was first sketched and was afterwards occasionally touched by Steele, he is in the main Addison’s creation.

Addison has been considered the perfect model for those who wish to learn how to write English. Johnson has rightly observed, “whoever wishes to attain an English style, familiar but not coarse, and elegant but not ostentatious, must give his days and nights to the volumes of Addison.”

The greatest style is the expression of the highest energy, intellectual and moral. Addison also taught the lesson of neatness, lucidity and precision “He and the Queen Anne essayists” as Hugh Walker says, “have been a permanent force on the side of sanity and restraint of thought and clearness of expression”.

To find Addison as an essayist, we should borrow the remark of J.H. Fowler – “It is good to read Addison first because he is full of charm because we soon come to feel an affection for this silent, keen and kindly spectator of men, because he brings back to us vividly the vanished life of the early eighteenth century: because he creates in Sir Roger de Coverley one of the most delightful characters in the whole range of English literature.”

It is one of the features of his essays that Addison used allegories, allusions, even anecdotes frequently in his essays. He used them successfully to issue his humour. It is for this reason K. Deighton commented, “As regards Addison’s style, of no one could it more truly be said that the style is the man. He has a manner, but not mannerism.”

Addison aimed at satirizing all vices, follies and foibles of the then English society. He threw the shafts of satire even to the unnatural fondness for trivialities and frivolities of dress and behaviour.

There is perhaps a little controversy that Addison is one of greatest essayists and critics of his age. The prose style of Addison is unsurpassable. If better to conclude with what E. Albert says, “His style has often deservedly praised. It is the pattern of the middle style never slipshod or obscure, or unmelodious. He has an infallible instinct for the proper, and an infallible ear for a subdued and grace rhythm.”