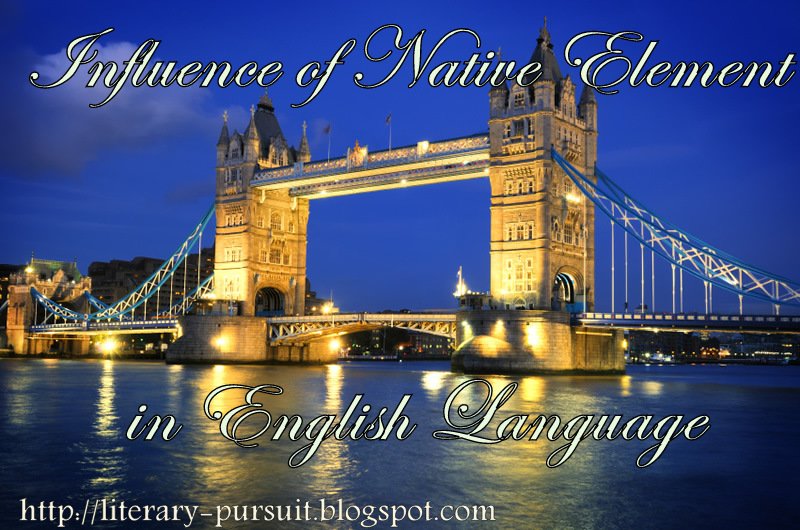 Anyone curious to trace the history of English vocabulary must assign its true place to the native element. So large is the number of foreign words in English that, from a certain point of view, it might be supposed that English had lost its Teutonic character. When one goes to study the foreign element in dictionary, it will be found to be far in excess of the native stock. However, one should not look over the fact that the Teutonic element still holds a fundamental place not only in the language of common life but also in literature. It is the basis of all good speaking and writing since the foundation or framework of the sentence is always Teutonic.

Moreover, the native element persists even in those writers who are most under the influence of foreign tongues. G. P. Marsh in his book Lecture on the English Language has made such a calculation and has placed the leading authors in the chronological order to ascertain the native element.

These figures are borne out further by a similar analysis of modern writings made by Dr. J. H. Jagger and are mentioned in his book Modern English (1925).

Besides the use of English vocabulary we also use English grammar. We have to keep one thing in mind that in ordinary conversation or even writing too, the number of words we use is limited and that we do not use more than 3 to 5 thousand words. Mr. Ogden has exemplified this true fact by manufacturing his Basic English containing 850 words only in all. It is possible to talk and write numerous sentences without applying any borrowed terms. But it is almost impossible to speak or to write without using native elements. Believe it or not, the fluency and proficiency attained in the mother tongue cannot be attained in a foreign language how-so-ever well-learnt.

It is worth noting that a larger number of native words are mono-syllabic. Pure English words are the following:

So also the names of the elements and their changes, of the seasons, the heavenly bodies, the divisions of time, the features of natural scenery, the moods of bodily action, the most common animals, the words used in early childhood, ordinary terms of traffic, the simpler emotions of the mind, terms of peasantry, satire, contempt, indignation, invective and anger are for the most part unborrowed. Similarly, words relating to art, singing and dancing, familiar action, feeling and qualities remain intact in native.

Sometimes we find English words combined with foreign elements. Such words are termed as ‘hybridism’, are in many in number, such as ‘hindrance’ ‘bondage’, ‘goddess’, ‘shepherdess’, ‘songster’ etc. There are results of mutual adjustment in the spirit of give and take during ups and downs English had to experience in its long and eventful history.