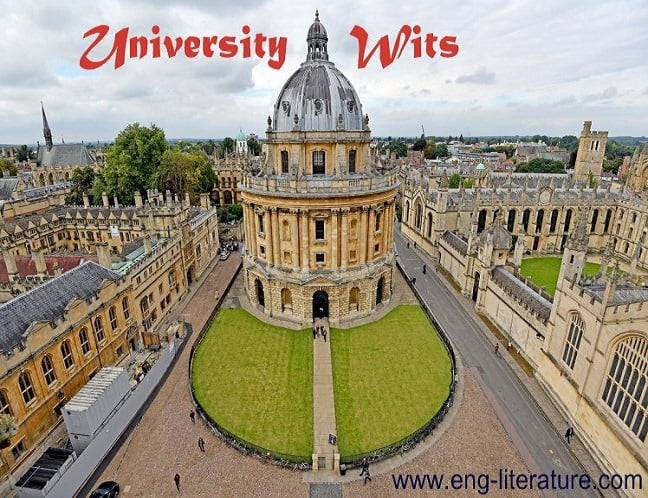 Contribution of University Wits to the Elizabethan Drama

After the establishment of The Theatre in 1576 there came a huge competition in the production of drama. Novelty in drama is always needed for success. The managers were finding such men who could patch up old plays with new matters. A bunch of bohemian writers associated with either Oxford or Cambridge University came forward in the literary canvas with their handful of contribution in the field of drama. They are called “University Wits”. They absorbed the new renaissance spirit and synthesizing the vigour of the native tradition with more refined classicism. The group consisted of seven- John Lyly, Thomas Kyd, Thomas Nash, Thomas Lodge, George Peele, Robert Greene and Christopher Marlowe. So they are known as “The seven Stars of the Cosmos.”

Lyly’s plays contain attractive lyrics. He was the first dramatist to write essentially high comedy. His best plays are: Alexander, Sapho and Phao, Endimion, Midas, Love’s Metamorphosis, The Wife in the Moon etc.

Peele is noted for his poetic Style and decorative phrases. His contributions are flowery. He wrote The Arraignment of Paris, The Chronicle of Edward I, The Old Wives’ Tale etc.

Greene was a poet, pamphleteer, proto-novelist and playwright. He is Powerful for his Romantic setting. His plays include Alphonsus, King of Aragon, Orlando Furioso, Friar Bacon and Friar Bungay etc.

Marlowe typifies the Renaissance spirit more completely than any other University Wits. He made heroic theme popular. Marlowe’s used of blank verse as an effective and pliant medium of tragic utterance. All his plays are tragedies- Tamburlaine, The Jew of Malta, Edward II, Doctor Faustus etc.

Lodge was popular for his romance, Rosalynde. His only original play is The Woundes of Civile War.

Nash made tremendous contribution to comedy. His comedies attack so many current abuses in the state. His most popular play is Summer’s Last Will and Testament.

The constellation of University wits made the Elizabethan drama more popular with Renaissance humanism and pride of patriotism. English drama for the first time in their hands recognized its potentialities and exuberance. They wrote classical plays, courtly comedies, farces, chronicle plays, melodramas etc. They gave thrill, action, sensation, hum our and music. Undeniably the University Wits paved the way for Shakespeare and other playwrights of the coming of ages.

2 thoughts on “Who are University Wits? Evaluate their contribution to Elizabethan drama.”