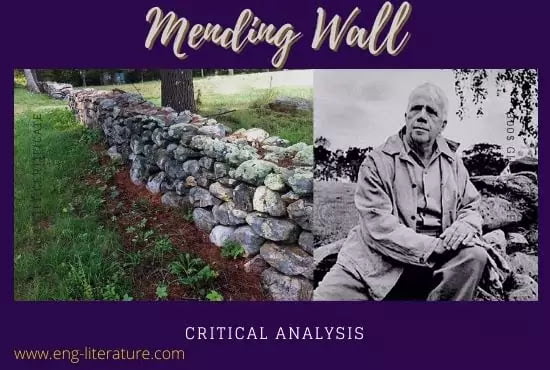 Mending Wall, one of the most widely quoted poems of Frost, was included in North of Boston published in 1914. It is a dramatic lyric on monologue. The speaker is a young man, presumably the poet himself, and the lyric is an expression of his views and attitudes. The other character is the poet’s neighbour, an old farmer. He does not speak even a single word, but we know of his views and attitudes, of his conservatism and orthodoxy from what the speaker says about him. Apparently the monologue is merely descriptive and anecdotal, but it leaves the readers with a sense of puzzlement, with a feeling that the poet is driving at some point which is not clearly understood.

The speaker in the poem, the poet himself, and his neighbour get together every spring to repair the stone wall between their irrespective properties. The neighbour, an old New England farmer, seems to have a deep-seated faith in the value of walls and fences. He declines to explain his belief and only reiterates his father’s saying, “Good fences make good neighbours”. The speaker is of the opposite opinion. As he points out:

“There where it is we do not need the wall:

He is all pine and I am apple orchard.”

To him the neighbour’s adherence to his father’s saying suggests the narrowness and ignorance of the primitive:

“He moves in darkness as it seems to me,

Not of woods only and the shade of trees.”

Yet the speaker’s own attitude is also enigmatic and in some respects primitive. He seems to be in sympathy with some elemental spirit in nature which denies all boundaries. It is suggested that there is some supernatural power at work in Nature, that is against all fences and walls:

“Something there is that doesn’t love a wall,

That sends the frozen ground swell under it

And spills the upper boulders in the sun

And makes gaps even two can pass abreast.

“Something there is that doesn’t l love a wall

That wants it down. I could say ‘Elves’ to him,

But it’s not elves exactly, and I’d rather

He said it for himself.”

The poem portrays a clash between these two points of view, and it may, therefore, seem that its meaning is the solution, Frost offers to the conflict. The poem leads one to ask, which of the two is right, the speaker or his Yankee neighbour? Should man tear down the barriers which isolate individuals from one another, or should he recognize that distinctions and limits are necessary for human life?

“Frost does not really provide an answer, and the attempt to wrest one from his casual details and enigmatic comments would falsify his meaning. It is not Frost’s purpose to convey a message or give us a lesson in human relations.”

Though the poem presents the speaker’s attitude more sympathetically than the neighbour’s, it does not offer this as the total meaning. Frost’s intention is to portray a problem and explore the many different and paradoxical issues it involves. He pictures it within an incident from rural life, and in order to reveal its complex nature he develops it through the conflict of two opposed points of view.

“The clash between the speaker and his neighbour lays bare the issue, which within their world is the simple matter of whether or not it is worthwhile to maintain the unnecessary wall in defiance of nature’s persistent attempt to tear it down.”

As a matter of fact, the real strength and effectiveness of the poem arises from this contradiction and clash of opposites. Untermeyer stresses this point and writes, “the strength of Mending Wall, one of Frost’s most often quoted poems, rests upon a contradiction. Its two famous lines oppose each other. The poem maintains that:

“Something there is that doesn’t love a wall.”

But it also insists:

The contradiction is logical for the opposing statements are uttered by two different types of people and both are right. Man cannot live without walls, boundaries, limits and particularly self-limitations; yet he resents all bounds and is happy at the downfall of any barrier.” In Mending Wall the boundary line is useless:

“There where it is we do not need the wall.”

And, to emphasize the point, the speaker adds playfully:

“He is all pine and I am apple orchard.

My apple trees will never get across

And eat the cones under his pines, I tell him.”

The poem has been symbolically interpreted by a number of critics. The wall has been taken to symbolise all kinds of man-made barriers. The suggests, the divisions between nations, classes, economic, racial, and religious groups and the like, but none of these, or combination of them all exhausts the symbol’s meaning.

“In the voices of the two men- the younger, whimsical, ‘new fashioned’ speaker and the old fashioned farmer who replies with his one determined sentence, his inherited maxim some readers hear the clash of two forces: the spirit of revolt, which challenges tradition, and the spirit of restraint, which insists that conventions must be upheld, built up and continually rebuilt, as a matter of principle.”(Lynen)

In short, the poem represents two opposite attitudes towards life – the one is surrender to the natural forces which draw human beings together, the other, the conservatism which persists in keeping up the distinctions separating them. Both are represented by two opposite type of characters – one young and progressive, and the other old and conservative.

The poem reveals the characteristic features of Frost’s style. The style is colloquial and dramatic. The speaker asks questions and then himself answers them. There is also the usual Yankee reticence and under-statement. A suggestion of some mysterious force in nature at work against walls and boundaries, is skillfully thrown out in such lines as “Something there is that doesn’t need a wall,” or, “I could say ‘Elves’ to him”. As Elizabeth Jenning points out, “Frost often writes of inanimate objects, as if they were alive and capable of human actions, thoughts and emotions.” Thus in the poem he addresses the boulders and say,

“Stay where you are until our backs are turned”,

as if the boulders had a will and understanding of their own. Similarly of apple trees he says,

“My apple trees will never get across

And eat the cones under his pines, I tell him.”

as if apple trees were mischievous boys robbing the orchard of their neighbours.

The monologue is cast in blank verse, and as usual with Frost there is the artistic balancing of strict iambic pentameter lines with looseness and variety to create the informal and casual effect of conversation. Lawrence Thompson, analysing the rhythmical pattern of the monologue, writes, regular iambic pentametre of the first line is modified by the substitution of a trochee in the first foot, and the modification seems to carry the reader into the poem with an almost impulsive sense of ease. In the second line, the undulating sense of thought and meaning is corroborated and heightened by the substitution of a spondee, which makes the rhythm of the line buckle upward when four almost equally strong accents are brought into close proximity with each other:

“That send the frozen-ground-swell under it”.

In the third line, there is another integration of sense and sound. Although line might be considered metrically regular, the very light accent required the short vowels in, ‘upper’, accelerates the tempo momentarily and gives an appropriately juxtaposition to the plausive consonants in boulders”. Then comes another effective variation in the fourth line, where the gap sense is heightened the dactylic substitution in the second foot, so that three accents crowd together and slow down the basic rhythm:

“And makes gap even two can pass abreast.”