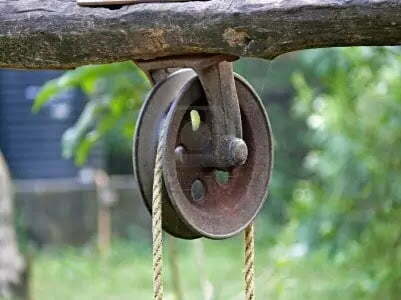 Q.      Asses George Herbert’s The Pulley as a
metaphysical poem?

What is distinctly
metaphysical about the poem is that a religious notion is conveyed through a
secular, scientific image that requires the reader’s acquaintance with, and
understanding of, some basic laws of physics. Pulleys and hoists are mechanical
devices aimed at assisting us with moving heavy loads through a system of ropes
and wheels (pulleys) to gain advantage. We should not be surprised at the use
of a pulley as a central conceit since the domain of physics and imagery from
that discipline would have felt quite comfortable to most of the metaphysical
poets.

The Supreme Creator delves into
His jar of blessings that contains virtues and attributes, bestowing strength,
beauty, wisdom, honor, and pleasure upon man. Wishing that man reach for heaven
for his peace rather than being complacent with nature, the Creator uses the
metaphorical “pulley” of restlessness which will draw man to reach
for heaven and attain spiritual perfection, rather than being satisfied on
earth with Nature. It is in his weariness, then, that man will realize his
imperfections and his need for God and the spiritual life. Then, he will reach
for God’s “pulley” and seek heaven. If love of God does not
return man to him, his weariness of the world will.  God wants an
emotional relationship with man.

The key to understanding the
poem’s title is two-fold: the denotation and connotation of the word, pulley. A
pulley is a mechanical device used for lifting weights with a downward
application of force.  The poet places this contraption then in the hands
of God to ascribe certain qualities to man: loveliness,
astuteness, reverence, enjoyment. God pulls each sacred gift from a glass
brimming over until he comes to the last one. Man falls into the trap, in the
process, forgetting his true nature, borne out by these possessions. Herbert
professes that God uses Rest as a pulley to pull Man towards Him, it was indeed
within Man from the beginning. Thus, the title of the poem clearly highlights
the main tune of the poem.

Mankind takes pride in its
religious traditions, legends and literature. Through ages religion is the part
and parcel of human life. Therefore, great devotional poets have given to
powerful expressions to their faith in God. For George Herbert poetry is
religion and religion poetry. He believed that a man should dedicate all his
gifts to God’s service, that a poet should make the altar blossom with his
poetry. Accordingly his most famous poem included in The Temple (1633), The
Temple as well as his other poems like “Virtue” and The Pulley
are full of faith and fervor. in The Pulley, the poet declares that his
present religious vocation is no more than a ‘cage’. The bond between man and God
which he had thought to be exceptionally strong ‘coble’ to draw him from the
earth to heaven was actually nothing but a ‘rope of sands’. He feels that it is
because of his weakness that he has been so firmly enslaved by God. Even the
message of death, the Biblical remainder that man must one day turn to
dust and then face the wrath of God was only an illusion.
Q.      What is the jewel of God’s blessings? Why
does God decide not to bestow it on man?
‘Rest’ is God’s most precious gift to man.

Since first attaining consciousness, the human
creature has been plagued with feelings of restlessness. This has resulted in
finding new and better ways of doing things. Herbert
intends to use pun on this word to emphasize on the rest that man can afford
every day and the ultimate rest that is in the hands of God. While man is
allowed the pleasure of all gifts, he retains ‘rest’ with him because it was
man’s choice to decide the time of rest, he will either end up using God’s
other gifts completely or over-use it to such an extent to forget the creator
of these. So he created pain along with pleasure to let man realize His worth.
In that sense, this feeling of restlessness has been a boon and blessing to all
mankind.

Q. What does the expression mean ‘So both should losers be’ in the poem “The
Pulley”?

By denying
man the most precious jewel, “rest,” God has not been unkind to Man
but he has only been all the more good to him. It is this denial of
“rest” which acts as the “pulley” which always draws
restless Man to God and also helps God to keep ambitious and wayward Man
under His control.  If God had not been kind enough to deny Man
“rest” then Man would not seek God and he would lose eternity and
consequently God would also lose Man to the eternal fires of hell: “So both should losers be.” Paradoxically,
God the ‘giver’ by refusing to give the most precious gift proves himself to be
all the more generous and kind.


Q. What did the God hope in the final stanza of the poem, “The Pulley”?


The poet, George Herbert in the final stanza of his poem, “The Pulley”
hoped that the human beings, in spite of having all the supreme
qualities like ‘beauty’, ‘honour’, ‘wisdom’, ‘pleasure’ bestowed by the
God, have to come to God as they lack best gift ‘rest’. God has withheld
the gift of rest from man knowing fully well that His other treasures
would one day result in a spiritual restlessness and fatigue in man who,
having tired of His material gifts, would necessarily turn to God in
his exhaustion. God, being omniscient and prescient, knows that there is
the possibility that even the wicked might not turn to Him, but He
knows that eventually mortal man is prone to lethargy; his lassitude,
then, would be the leverage He needed to toss man to His breast.
~~~~~*~~~~~