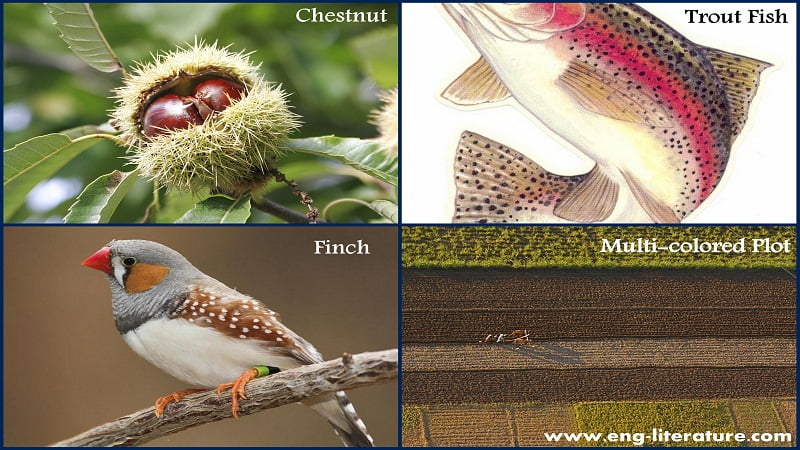 Hopkins being a keenly sensuous poet and a Roman Catholic priest at the same time his poetry bears the unmistakable stamp of his poetic sensibility and devotional fervour. The poet and the priest in Hopkins are often in conflict and generate a lot of tensions. There are only a few poems in which the contradiction seems to be resolved and the poet and the priest are in harmony. Hopkins’s “Pied Beauty” is one of such poems.

The poem, “Pied Beauty” (1877) opens with a declaration — “Glory be to God for dappled things” — that suggests the author’s reverence for God, the Creator. This phrase stems from the motto of Hopkins’ Jesuit society of St. Ignatius Loyola, “Ad majorem Dei gloriam”, which, when translated, reads, “to the greater glory of God.” The concept of championing God and His word resonates deeply with the Jesuit culture: they strive constantly toward expanding the Roman Catholic Church through preaching the “greater glory of God.” In “Pied Beauty” Hopkins follows Duns Scotus who was pre-occupied with the distinctiveness of natural beauty as reflected through the creation of the Almighty.

This poem wears its meaning, at least the surface of its meaning, on its sleeve: it is a hymn of praise to the creator, a hymn of thanks for the richness and diversity of the world. Oftentimes considered one of the greatest Victorian poets, Hopkins’ poems are full of creative word combinations that seem to capture the imaginative essence of things. Here, he uses those interesting hyphenated descriptions to celebrate the variety of Creation and its great beauty. The sounds of these images are crisp and ring nicely in the mouth.  “fresh-firecoal,” “finches’ wings,” these sounds have a pleasant crunch to them. The second stanza turns from these corporeal variations to the more spiritual, moral characteristics of the world. In listing several paradoxical traits — “swift, slow; sweet, sour; adazzle, dim” — Hopkins emphasizes the spectrum of emotions and intangible qualities present in these physical entities.

“Pied Beauty” is a catalogue of God’s creation testifying to the poet’s accurate observation of natural objects which changes from time to time, things whose function appear both as separately and collectively. Hopkins begins with praise of God creating poly-coloured, poly-shaped, poly-natured things created by the Supreme Creator. God has created the “couple-colour” sky like the double colour cow. He has created the fresh water fish, trout with pink-dots on the back. The fallen chestnut is reddish brown like the hue of glowing fire. The Divine Architect also crafted landscapes isolated into separate plots: green pasture, brown uncultivated lands and grey ploughed fields. The final creation is of the “trades” or different occupation of man, with their rich diversity of appliances and equipments. The Creation of God (from Genesis), has been mentioned in this devotional poem with much sincerity.

Hopkins is staunch believer of the theory of ‘inscape’ – the individual distinction of every created natural object. His ‘instress’ – his feeling of wonder at the variegated and changeful beauties of the earth – comes out vividly in the query:

“Whatever is fickle, freckled (who knows how)?”

“Pied Beauty” is a lyrical love poem. But the love treated in the poem is not the love between man and woman, but between man and God. Here Hopkins refers to the Christian concept of God as a Lover and a Protector. God, Himself is the creator and source of pied beauty. He also refers to the concept of  “God: the Trinity” : God the Father, God the Son, and God the Holy Ghost. The poem concludes with the poet’s imperative to praise God:

Hopkins calls this poem a “curtal sonnet” in which he minimizes the traditional sonnet forms by reducing its length form 14 lines to 10 ½ lines (6 + 4 ½ ). He also follows the “spring paeonic” metre with one stressed plus three unstressed syllable. The poem is written in “sprung rhythm” which was the rhythm of common speech, and of written prose.

Throughout his life Hopkins remained religious and spiritual. He wrote to Bridges, one of his best friends: “I am a eunuch, but it is for the kingdom of heaven’s sake.” Religious preoccupation gripped him so terribly that he had neither time nor energy to carry on his writing. Thus only a few poems he composed, he got the opportunity of singing the glorious hymns of God.