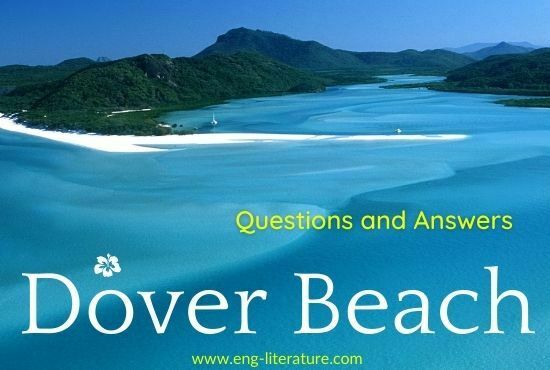 Ans. Matthew Arnold, a luminous poet-critic of Victorian age paints a fine evening atmosphere just to show its vacant existence. On his honeymoon trip with Lucy, the poet standing on the Dover Beach enjoys the natural landscape. The tide being full, the sea is calm and quite. The French coast is bathed in moonlight. The English cliffs are glorious with evening moonlight in the tranquil bay. All these qualities get a higher significance when an extra music is added, created by the waves on the pebbled shore. But this extraordinary appearance betrays the reality.

Ans. Arnold, a front ranking poet critic though judged everything with the faculty of brain, at the same time has made his poems unique by the use of superb imageries. In ‘Dover Beach’, two such imageries are Sophoclean image of waves and the image of sea of faith. The first image clearly reflects the eternal note of human sufferings through the rise and fall of waves. Secondly, the faith image clearly depicts the national faith in religion before the advent of science. Of course, the image of Trojan war is not to be under estimated.

Ans. Sophocles was a great Greek tragedian. He was a minute observer of miserable human life on earth. He listened to the sound of the waves in the Aegean Sea and instantly the eternal note of sadness occurred to his brain. Standing at Dover Beach, when Arnold was enjoying the evening landscape, he also heard the sound produced by the ebb and flow of waves on the pebbled shore. He was fully aware of the spiritual crisis of his age. So immediately, he was also reminded of the trouble prevalent in his age.

Ans. The Victorian age is the most conspicuous age because in this age materialistic progress took place endlessly and spiritual crisis got the upper hand. The common people were a victim to aimlessness. They couldn’t find where to go, what to do. They were like woods floating in the sea waves. Neither they could forget religion fully nor they could embrace science totally. So, they were in an unspeakable condition. The poet wants to opine that when there was only religion in England, the common life somehow spent their time without any problem. But the emergence of science had shaken the old belief fully and created doubt and skepticism in the minds and hearts of common people. This situation without any urgent salvation always caused the people to pay a great penalty.

Ans. While visiting Dover Beach on their honeymoon trip, Arnold makes a loving request to his wife to remain faithful to him. The present time was an age of crisis, filled with doubt, darkness, skepticism and aimlessness. The spiritual faith which they previously had is now dried up at the face of scientific advancement. So, their present and future are fully dark. They don’t know what to do and where to go. In this condition, death is inevitable. So he requests his wife to make love truthfully because this is the panacea without which their doom is fixed. Arnold thinks by making love only this problem can be overcome.

Ans. This line has a classical reference. In time of Trojan war, when the soldiers were fighting, they didn’t know whom they were fighting with due to the disadvantage of darkness. Naturally they killed their friends as well as foes unknowingly. The Victorian situation is comparable with this. The conflict between religion and science paralyzed the flow of Victorian life. National progress was fully stopped. Forgetting their thoughts, development they were busy with religion and science and in this way they were bringing wane to them. So they are no better than those ignorant soldiers who were fighting in darkness for killing themselves. The poet wants to air that it is our duty to lead the nation without any stop, but what happened is just opposite to this. They forgot their existence and blindly were choosing between science and religion.