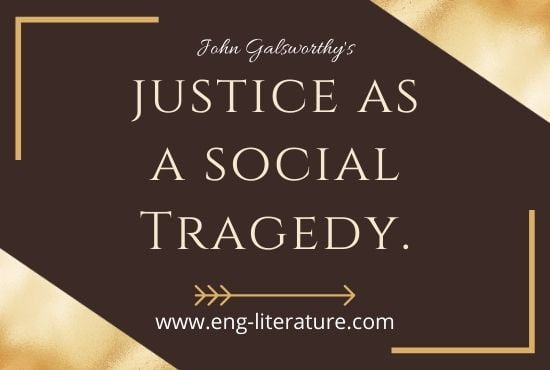 Justice as a Social Tragedy

The term tragedy is broadly applied to dramatic representations of serious and important actions which turn out disastrously for the central character or the tragic protagonist. Aristotle defined tragedy as ‘the imitation of an action that is serious and also having magnitude, complete in itself, incorporating incidents arousing pity and fear, wherewith to accomplish the catharsis of such emotions’.

In Greek as well as Shakespearean tragedies we find tragic incidents showing suffering and defeat. But these do not leave us depressed, we feel relieved and even exalted. According to Aristotle, a tragic hero will evoke pity and fear, if he is neither thoroughly good nor thoroughly bad, but one who is good with a tragic flaw in his character. The hero is not an ordinary man and this is why the tragic situation and the tragic flaw in his character evoke so much pity and terror. Such a hero, better though than we are, is shown suffering a change in fortune only because of this flaw-which is but an error of judgement.

But in modern tragedies the tragic heroes are ordinary mortals like ourselves, -not like Hamlets and Othellos and Macbeths. They are mostly the offsprings of social problems, and so their bewildered defeat evokes in us only compassionate understanding instead of tragic pity and terror. Galsworthy’s Justice has such a hero in William Falder who is only a poor clerk with little means to help an unhappy woman he is in love with. There is little grandeur in his act of forgery and in his death. We feel sorry for him, because we have our sympathy for him. At the end we feel depressed, not relieved and exalted. Ruth Honeywill, too, claims our sympathy, though she is not dead. We feel sorry for her, for the death of Falder leaves her without a friend in a cruel society.

Falder’s error of judgement leads him to his detection. It shows his desperation, not cool calculation when he alters the counterfoil of the forged cheque. If he had not altered coat counter foil, Davis would remain the suspect. In spite of the fact that the pathos in his character draws tears in our eyes, Falder is too weak and pathetic to reach the tragic height. Falder is just a helpless victim of a system where in the name of morality and justice, the poor and the weak are constantly crushed beyond recognition. The flaw is not in Falder, it is in our system of things, in our stale values. His end represents the frustration of the modern man who is constantly harassed and tormented by the false values of a commercial society.

Now, one really has reason to wonder what makes Galsworthy call Justice a tragedy when it does not quite conform to the Aristotelian definition or Shakespearian practices in the genre. Galsworthy’s principal concern seems to be the problems of modern society, and so his characters are made to represent certain ideas. Obviously such characters do not have any scope to grow, nor the situations develop to help them grow. In Justice, for example, Falder is rather flat and a mere type, remaining the same from beginning to end-brooding, nervous and dazed. But that is only natural. For Falder is born in a society where Macbeths and Othellos do not fit in.

So the Aristotelian definition or Shakespearian attitude to heroes in tragedy loses its relevance for Galsworthy. As Prof. Nicoll rightly says, Galsworthy has given a new dimension to tragedy by showing the waste caused by the destruction of innocent and well-meaning social beings by malicious social forces which are as strong today as the gods and the destiny were in the past. We have to judge Justice in the light of this new concept of tragedy. According to this new concept the modern dramatist is required to create his work accommodating two demands: the demand of Art and the demand of life.

Galsworthy tries sincerely to keep away from these apparently conflicting demands and succeeds in reconciling them to a considerable extent. And the result of all this is his innovation-the new social tragedy in which the most powerful character is the society with its all-pervasive influences. When the individuals like Falder come in conflict with this powerful character, they are ruthlessly eliminated. The other characters in the tragedy are poor and weak victims of the social forces and they are mercilessly treated for straying from the rut.