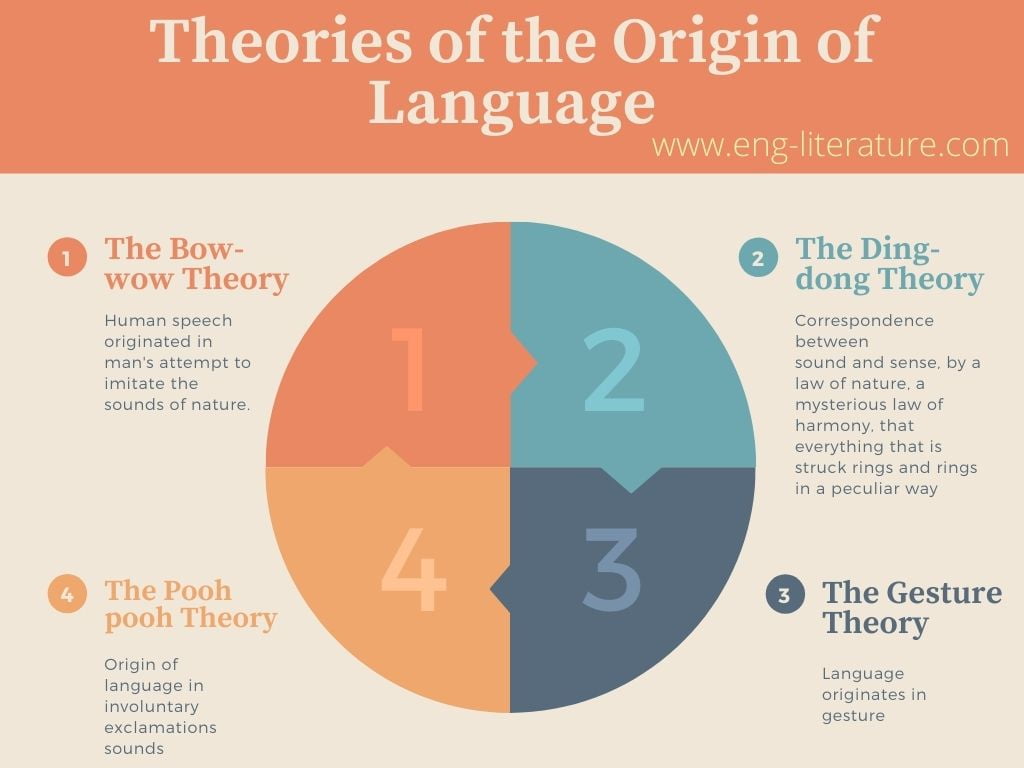 Theories of the Origin of Language

This theory by Max Muller supposes that human speech originated in man’s attempt to imitate the sounds of nature. Thus a dog might be called “bow-wow”, or a cow “moo”. There is no denying the fact that such imitation accounts for a certain number of words in the English vocabulary e.g. cuckoo, hiss, gurgle, whistle, whine, babbie, prattle, hoopoe, peewit etc. Words that have this origin are sometimes said to be onomatopoeic. This theory forms a part of the larger subject of ‘sound symbolism‘.

Another familiar theory of the origin of language is the ‘dingdong theory’. At one stage it was upheld by Max Muller but later it was abandoned. It sought to explain the correspondence between sound and sense, by a law of nature, a mysterious law of harmony, that everything that is struck rings and rings in a peculiar way. The words ‘zigzag’ and ‘dazzle’ may be cited as examples. In the opinion of Prof. Taraporewala, the Hindi word “Jana Gana” “Jog Mog” and a larger number of the Bengali words (Dhonatyak Shobdo) may come under this head. Reduplications for the sake of emphasis, as in “a big big man’, may come under this head.

This holds that language originates in gesture. This theory was formulated and advanced by Wilhelm Wundt and Sir Richard Paget. The gesture-theorists opine that the primitive people communicated with one another by means of gestures made by hand, and ultimately the language-equivalents were substituted for these gestures. Sir Percy Nunn in his book Education, its Data and first Principles develops his theory in full, and Macdonald Critchley deals with it elaborately in his work, The Language of Gesture.

Noire enunciated the ‘yo-he-ho theory’. He saw the source of speech in acts of joint or common work, in which, during intense physical effort, cries or sounds partly consonantal might be emitted. Such sounds might come to be associated with the work performed and so become a symbol for it; the first words would accordingly mean something like ‘heave’ or ‘haul’.

The idea of the origin of language is the use of tongue and mouth gestures to mimic manual gestures. For example, saying ta-ta is like waving goodbye with your tongue. But most of the things we talk about do not have characteristic gestures associated with them, much less gestures you can imitate with the tongue and mouth.

The idea that speech emerged from the sounds of inspired playfulness, love, poetic sensibility, and song. This one is lovely, and no more or less likely than any of the others.

Let us peep into the Biblical account of the origin of language which is contained in the second chapter in the book of Genesis. According to this account, “the Lord God formed man of dust from the ground, and breathed into his nostrils the breath of life, and man became a living being.” Afterwards he created trees and rivers. And then “out of the ground the Lord God formed every beast of the field and every bird of the air, and brought them to the man to see what he would call them; and whatever the man called every living creature, that was its name. The man gave names to all cattle, and to the birds of the air, and to every beast of the field….” It is an account of the birth of language in man, who is placed at the centre of the world.

9. Another theory to be mentioned was adduced over a century ago in the early days of modern linguistics. In 1823 was published in Edinburgh The History of the European Languages by Alexander Murray, D.D.  In this work he states 9 words which he calls “the foundations of language.” They were uttered at first, and probably for several generations, in an insulated manner. The circumstances of the actions were communicated by gestures and variable tunes of the voice, but actions themselves were expressed through suitable monosyllables.

10. The last theory of the origin of language was proposed some years ago by the Danish linguist, Otto Jespersen. This language expert says, ‘we must imagine primitive language as consisting (chiefly, at least) of very long words, full of difficult sounds, and sung rather than spoken’. It is the strangest of all theories, but deserves serious thought because of the learning of the author.

Jespersen, unlike many other linguists of his day, was not prepared to accept the view that the origin of speech is unknowable. He suggested that “there once was a time when all speech was song, or rather when these two actions were not yet differentiated ….”

“Language was born in the courting days of mankind; the first utterances of speech I fancy to myself like something between the nightly love-lyrics of puss upon the tiles and melodious love-songs of the nightingale.”

All the theories noted above are only partially true and do not seem to satisfy fully the intelligentsia. As they are many, they frustrate any attempt at arriving at an acceptable and convincing solution. For the present, we may rest content with ample knowledge of the theories alone.