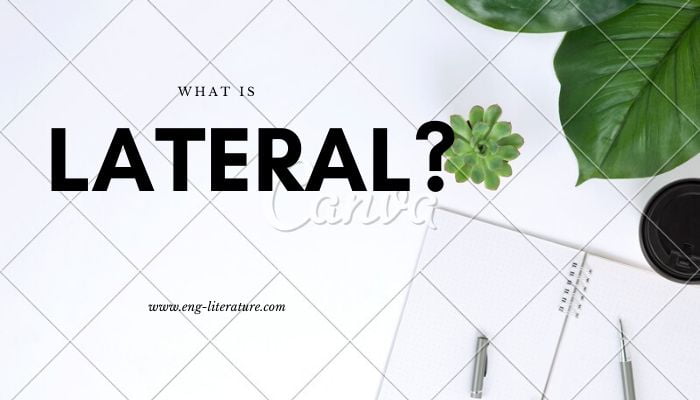 Definition
Lateral consonant approximant is articulated with a
stricture of partial closure, i.e. with complete closure in the centre of the
vocal tract, but the sides of the tongue are lowered and the lung air escapes
along the sides of the tongue freely. The lateral sound is
frictionless. It is in many respects vowel-like and could be considered as a
continuant. There is one lateral consonant in English which is symbolized / l /.
/ l / as in the word ‘leader’
Classification
There is only one lateral
consonant in English: /l/. Like other consonants the lateral sound is
customarily described on the following three bases:

1. Manner of Articulation: The
manner of articulation refers to  how the articulators approach to each
other to create a closure. It also determines the type and degree of hindrance
the airflow meets on its way out affected by the closure. The closure takes
different manners for different sounds. For instance, during the articulation
of the lateral sound the following sequence of events occurs:
·
The tip of the tongue
makes a firm contact with the upper alveolar ridge to form a complete closure
in the middle of the mouth.
·
The soft palate is
raised to completely block the nasal passage .
·
The sides of the tongue
are lowered to let the air escape along the sides of the tongue without any
friction.
2. Place/Point of Articulation: The place of articulator refers
to the place or point where the speech organs create a closure by either coming
close or near contact. This is the place where the sound is produced. For
lateral sound the place of articulation is alveolar, which means it is
articulated with the tip the tongue at the alveolar ridge.

From the above discussion we can identify /l/ as
a voiced alveolar lateral.
However, In English the pronunciation of this sound differs from person to
person. But the usage of wrong /l/ won’t necessarily change the intended word.
Therefore, In English /l/ occurs in two pronunciation variations, that is, /l/
consists of two allophonic variants:

Distribution: [ l ] is found before a
vowel. It is distributed in all three basic positions.


(ii) Dark [ l ]: Dark /l/ also
involves raising the back of the tongue towards the velum.The IPA symbol for this
lateral variant is a ” l ” symbol with a tilde “ ~ ” symbol
superimposed onto the middle: [ ɫ ].
Can
Paul call tall Phil on his mobile?


1.      The tip of the tongue makes a firm contact
behind the upper alveolar ridge to form a complete closure in the middle of the
mouth.
2.      At the same time the back of the tongue is
raised towards the velum or the soft palate.
3.      The sides of the tongue are lowered to let the
air to escape along the sides of the tongue without any friction.
Voicing: During the production of
[ ɫ ] the vocal folds vibrate. It is thus a voiced lateral variant.

Distribution: [ ɫ ] occurs before
consonants. It is distributed in the final position only. 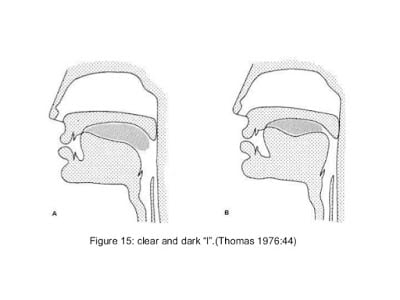