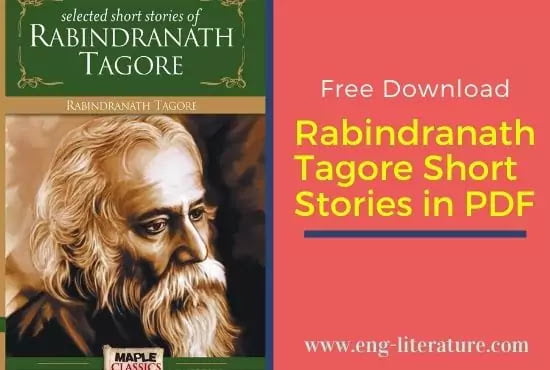 RabindranathTagore, the literary titan of India and a polymath left a tremendous contribution in the arena of short story. His achievement, to take the short story to the masses, is highly commendable. The themes and characters of Rabindranath’s short stories are as varied as his oeuvre.

Tagore spontaneously inter-mixed stark realism and poetic idealism in his stories which reflected the contemporary life in rural and urban Bengal. Many of the stories portray conflicts or tensions between the new and the old, cruelty and sensitivity, solitude and crowd, male and female.

The Postmaster is one of the earliest stories written by Rabindranath Tagore. The lyrical quality of this story consists in its being a record of the inexpressible grief of a village orphan girl who has none whom she can call her own. We find a similar situation in The Castaway, Here is an orphan boy Nilkanta who has the same tender regard for Kiran as Ratan has for the postmaster.

Tagore excels in dealing with adolescence psychology. In Home Coming the character of Phatik is a fine study of the adolescent mind. Phatik is a village lad of fourteen who is taken to his uncle’s home in Calcutta for his studies.

Kabuliwala is study of peculiar bond of relationship between the people despite the vast hiatus of ages. Here love transcends social barrier and makes us sympathize with a poor Kabuli fruit seller. The writer skillfully describes the beginning of friendship between Mini, a small Bengali girl of Calcutta and Rahman, the fruit-seller, who comes every year to Calcutta leaving his tiny daughter in his mountain home in Afghanistan.

Tagore believed that man can upgrade morally and spiritually if he lives a life in close contact with nature. The Hidden Treasure is an apt illustration of that.

In the stories In the Night and The Hungry Stones, Tagore created a world of supernatural thrill, suspense, mystery and fear. A solitary marble palace built by Emperor Mahmud Shah II for his pleasure and luxury about 250 years ago is the background of the story, The Hungry Stones.

Tagore hated the prevailing education system which cramped the personality of the children. Problems faced by the wards by their teachers are mirrored in Housewife.

In The Exercise Book the agony of a child is presented. Tarapada is after his heart, a settled life is not for him. Balai clings to his flowers.

Rabindranath portrayed various characters in his short stories, but women occupy a special niche in his short stories. His women rarely break the familial norms, or so it seems as the mould of femininity remains immutable. In his Wife’s Letter, the women are portrayed as slowly trying to push the boundary that patriarchy has put in place.

Hardships of Bengali women due to unhealthy customs are seen in many of his stories. In Number One, a woman commits suicide to get rid of biases. The Living or Dead deals with the same thing. In Punishment a man kills his wife to save his brother. Extraction of dowry from marriage leads to the stoppage of marriage in The Unknown. In Debits and Credits the evils are scathingly castigated.

Thus we see that Tagore sings the saga of the pathos of common life from the standpoint of a sympathetic humanist. He envisions a better future for mankind despite its present woes. His stories are universal and eternal in their appeal

The Hungry Stone and Other Stories

Mashi and Other Stories

NB: If you want to get PDF of all Rabindranath Tagore Short Stories Book then join my Telegram Channel and request me for books.