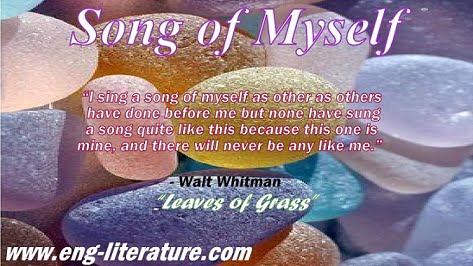 Mysticism is not really a coherent philosophy of life, but more a temper of mind. A mystic vision is intuitive; a mystic feels the presence of divine reality behind and within the ordinary world of sense and perception. He feels that God and the supreme soul animating all things are identical. He believes that all things in the visible world are but forms and manifestations of the one Divine life.

The self-proclaimed “American Bard” Walt Whitman is undoubtedly a mystic and transcendental poet. He shocked his contemporaries by his embrace of the sensual; “Song of Myself” has been regarded as a prolonged expression of an experience that is essentially mystical. The beautiful sampling of Whitman’s poetry from “Song of Myself” offers a glimpse into the spiritual side of his most radical themes–love for country, love for others and love for self. Whitman seeks to tear down the belief the spiritual resides only in the religious and embraces the idea that nothing is more divine than humankind, nothing greater than individual soul. There is a great deal of sexual elements in Whitman’s poetry; sexual connotations are inseparable from the mystical experience.

In “Song of Myself” Whitman’s overjoyed revelation of union of his body with his soul has been depicted in his mystic expression. Held in the trance-like grip of the soul from beard to feet, the poet has a feeling of fraternity and oneness with God and his fellowmen:

And that all – of the creation of love.”

As a mystic Whitman believed that there is no difference between Creator and the Creation. His “self” is a universal self. He sees people of both sexes, all ages, many different walks of life; even animals are included. The poet along with the divine spirit not only loves them all; he is also a part of them.

In “Song of Myself”, mystical experience is symbolically conveyed through a piece of sensuous experience. Being a mystic poet of his own kind, Whitman gives equal importance to body and soul; he becomes the spokesman of the “forbidden voices” of ‘sexes and lusts indecent.’ He loves his body and is sensitive to another’s touch. Both the lady and the prostitute enjoy equal position in his poetry, for the inner reality, the soul has been created by the same God. Whitman declares: “If anything is sacred, the human body is sacred.” Thus he takes equal delight both in good and bad, noble or ignoble.

Whitman does not reject the material world. He seeks the spiritual through the material. He does not subscribe to the belief that objects illusive. There is no tendency on the part of the soul to leave this world for God. Whitman does not belittle the achievements of science and materialism.

Whitman praises not merely life, but absolute worth of every particular and individual person. Thus, his comic consciousness is the result of the expansion of the ego. The word “I” assumes an enlarged universal connotation bringing the smallest and the greatest things of the universe within its compass.

James E. Miller considers Whitman’s Song of Myself as “inverted mystical experience”. While the traditional mystic attempts to annihilate himself and mortify his senses in preparation for his union with the divine; Whitman magnifies the self and glorifies the senses in his progress towards the union with the absolute. Although Whitman is influenced by Emerson and oriental mysticism, yet there is a difference between Whitman’s mysticism and the mysticism of Orient. Oriental mystic believes that communication between soul and God is possible only through the mortification or conquest of the senses and the physical appetites. On the other hand Whitman believes that spiritual experiences are possible without sacrificing the physical appetites.

Whitman seldom lost touch with the physical reality even in the mist of his mystical experience. Physical phenomena for him were symbols of spiritual reality. He believed that “the unseen is proved by seen”; thus he makes use of highly sensuous and concrete imagery to convey his perception of divine reality. He finds a purpose behind any natural objects- grass, sea, birds, flowers animals etc.

Whitman is a mystic as much as he is a poet of democracy and science, but a “mystic without a creed.” Song of Myself portrays Whitman’s poetic birth and the mystical journey; the poet feels the exhilaration of being no longer bound by the ties of space and time: he is “afoot with” his “vision.” He feels able, indeed, to range back and forth over all time, and to soar like a meteor out into space. His entity is unique: he can assume the “gigantic beauty of a stallion” and can turn himself  into a departing air or annihilate himself into a dirt.

The poet does not deny but dismisses his “contradictions,” asserting,“I am large, I contain multitudes.” In the beginning the poet vows to “permit to speak at every hazard, / Nature without check with original energy.” Leaving “Creeds and schools in abeyance” , he goes “to the bank by the wood” and becomes “ undisguised and naked” similarly, at the end, he describes himself as “not a bit tamed,” as “untranslatable,” as one who sounds his “barbaric yawp over the roofs of the world.“ His journey over and done, he prepares for departure, bequeathing himself “to the dirt to grow from the grass” he loves, and tells the reader: “If you want me again look for me under your boot-soles.”At the end, the poet admonishes his readers to “keep encouraged” and continue their search for him, promising:

“I stop somewhere waiting for you.”