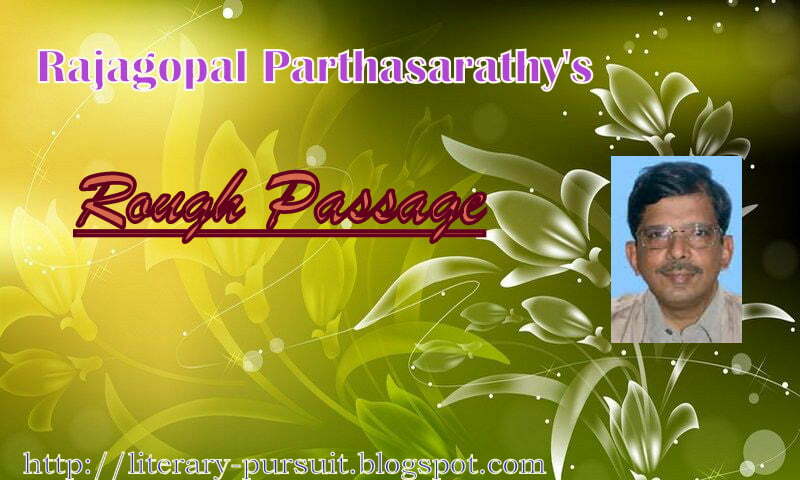 Rajagopal Parthasarathy is a bilingual poet who wrote in two languages – Tamil and English. His magnum opus “Rough Passage” took him fifteen years (1961-1975) to complete. The essence of the poem is definitely the influence of the two different cultures on the life of the poet speaker, Mr. Parthasarathy. The poem is painted in the clash between two different cultures – English and Tamil. The poem is written in three parts:

3. “Homecoming”, the third and final part explores the phenomenon of returning of one’s home.

The strength of his poem derives from the writer’s sense of responsibility towards crucial personal events in his life.

Y.P. Kalra in his essay entitled “The Indian Literature Today” says that Parthasarathy is concerned with the problems arising from the use of English Language and his as aspiration to become an English poet. This blind inclination towards foreign language alienated him from Tamil culture. As a result he has sensed a loss of identity of his own in the own cultural arena. The first part of the poem, named “Exile” depicts the kind of life the poet had to lead among the alien people in England.

Parthasarathy, having been born as a Tamilian and having inherited a glorious Tamil past, went to England for his higher education. But there he received a big shock on realizing that, although he had learnt a good deal in pertaining the English language, the English literature, and the English people, he had been delinked from the roots of the whole process. Something of this feeling is indicated in the following lines:

“You learn roots are deep;

That language is a tree, looses colour

He also discovered, to his utter surprise that England is a dirty place, and quite unlike what he had thought it to be:

“Lanes full of smoke and litter

With puddles of unwashed

The British people’s imperialistic arrogance towards Indians are also offended his sensibility. He found that they referred the Indians as “coloureds”. On returning to India, Parthasarathy felt that, by having achieved some command over the English language, he had lost much of his native identity. He has now become a mismatch of his own country:

“School was a pretty kettle of fish:

The spoonfuls of English

Brew never quite slaked your thirst.”

He felt that the best time of his life had been lost on making use of foreign language and that results him social separation:

“My tongue in English chains

I return after a generation, to you

The use of foreign language impoverished the Indians as they adopted it at the cost of their own culture. He points an accusing finger at the sin committed by the English in having led the Indian mind to the English poets only:

“How long can foreign poets

Provide the staples of their lives?”

The Indians are unable to understand the perfect knowledge of the English poets because of their ignorance of the English myths and customs, English seasons, English culture, English history. Parthasarathy forces on the futility of time and energy which the Indians consume having this learning.  This deficiency or lacuna has made many of the so-called urban a mock-replica of the westerns with their manners and fashions. The poet considers the imperative necessity of rejuvenation by linking oneself to one’s cultural past:

“Turn inward. Scrape the bottom of your past.

For skeleton of your Brahmin Childhood.”

In an ingenious style Parthasarathy expresses the slavish mentality of the Indians in blindly aping the West:

Are there, complete with bars and golf-links.”

With an undercurrent of mild irony, and feeling distressed and sullen, he attacks the Indian for imitation Western ways and manners:

“What have I come

Here for from a thousand miles?”

In “Rough Passages”, Parthasarathy describes the sense of isolation and the feeling of disillusion which constitutes the modern man’s predicament. The modern man’s heart remains barren and starved although he appears to be surrounded by all sorts of company. His eyes are the:

“hinges which the mind turns

Its fragile door on,

As I hob-and-nob with death”

Through the course of his life he observes the change in life-style and the mental lacuna in the outlook of the modern generation. Noise, hurry, impatience and emptiness have made modern life meaningless. The fragmentation of the joint family system has aggravated the feeling of loneliness:

All over, noises, noises.”

Man has to compromise with life:

“I have exchanged the world

For a table and chair.”

Parthasarathy believes that a poet should be the nucleus  of wisdom and joy . A poet like the sun, should cast light on the regions engulfed in darkness and make them radiate happiness. He would carry the wisdom to another city “in the bone urn of my mind”. The saga of human mind is full of sadness and consists only of noise and fury. Human beings are unable to comprehend the magnanimity of the Creator. But a poet can give artistic expression and permanence to the worldly activities of human beings and thus celebrate “something so perishable, trite”. Parthasarathy advocates the need of mental stability and fortitude in the face of the emptiness and the vicissitude which constantly threaten human life.

Parthasarathy is severely critical of the Indo-Anglican poets who are prospering either by being articulate about nothing or by fattening themselves on the flesh of foreign poets.

“One can be articulate about nothing…

The son of a bitch

Fatten himself on the flesh of

“Rough Passage” is ultimately a document of self-assessment of a highly sensitive poet who is haunted by the feelings of cultural alienation and rootlessness. He is fully conscious of the transitoriness of human life:

He wishes his poetic powers to decline and to be extinguished in this age of spiritual emptiness:

“Its time I wrung the handkerchief

Of words dry. Dipped it

In the perfume of silence.”

He finds the way to courage through defiance and by deflating the situation:

Into a  paper ball and tossed it

The poem in “Rough Passage”, says one critic, constitute a three-tier group with a unilateral theme on a primary level and with multi-lateral theme on a secondary level. In this work we hear the voice of sensitive man who is deeply conscious of his social and personal commitments. Through “Rough Passage”, Parthasarathy wishes to awaken the fashionable middle class Indian society which mortgaged its conscience for material gains during British rules.