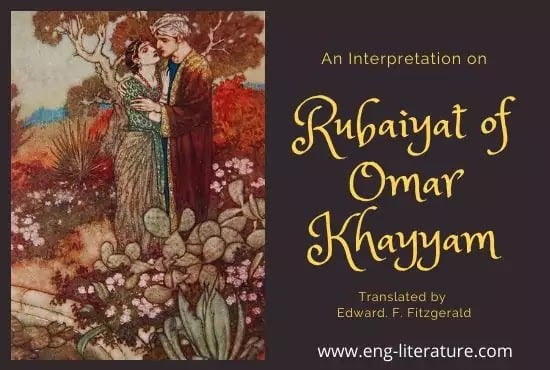 The Rubaiyát is a celebration of the pleasures of the moment (some call it epicureanism). Fitzgerald himself spoke of its mood as “a desperate sort of thing, unfortunately at the bottom of all thinking men’s minds, but made music of”. Undoubtedly it is this element-its music, along with its imagery- that has made the Rubaiyát popular with many who do not share its philosophy of skepticism. At any rate, it is another evidence of the complexity of the Victorian Age.

The poem, which apparently is a celebration of the sensuous present life, is underlined by a deep sadness that runs as an undercurrent throughout. The indulgence in the life of the senses has its natural other side- an acute awareness of the decay and death of life which rings down the curtain on the least of life.

Some compare the theme of the poem to the poem “Gather Ye Rosebuds while ye may” of Robert Herrick and Andrew Marvell’s “To His Coy Mistress” (Carpe diem).

However there are other possible interpretations too. There is a diametrically opposing view of the whole poem, which eastern critics espouse. It is the mystical view. According to these interpreters, the poem is viewed as a product of Sufism- a mystical cult that flourished in Persia and India during the 11th and 12th centuries. Here the images of wine love and other delights take on metaphoric meanings. It is like the mystical interpretation of the Songs of Songs in the Bible.

Yogananda puts forth his argument in the Introduction: “In Persia, Omar Khayyam has always been recognized as a highly advanced mystic and spiritual teacher. His Rubáivát have been revered as an inspired Sufi Scripture. The first great Sufi Writer was Omar Khayyam”

Omar Kahayyam dwells on some of the perennial problems that beset the mind of man. He speaks about god about human mortality, about time and its action on life and so on. He takes an attitude towards it. We may see it as fatalism or skepticism .The recurring imagery of wine may be interpreted as something that signifies intoxication. This intoxication is of the spiritual kind, just as the sexual union expressed in the Song of Songs is a metaphor or symbolization of the ecstatic union of the soul with God.

The mystical interpretation set forth by Paramahamsa Yogananda is of this kind. If we accept his arguments, we will be able to see Omar Khayyam as the exact opposite of what he is made out to be by western critics.

Professor Horne remarks: “What then becomes (Omar’s) passionate praise of wine and love?’ “They are merely the thoroughly established metaphors of Sufism; the wine is the joy of the spirit, and the love is the rapturous devotion to God.”

Yogananda’s argument is also based on the so-called ‘Carpe diem’ theme which frequently comes up with references to the brevity of life. He says:” Omar Khayyam’s insistence on the theme of life’s brevity- one he sounds repeatedly throughout these quatrains- is itself the strongest possible argument against the claim of Westerners that he was a hedonist. What pleasure-seeker would dwell at such depressing length on the impermanence of his coveted pleasures? A poet of hedonism might, like Robert Herrick, urge his readers to enjoy this world while they can.

His cheerful reminder of life’s brevity, however, would have lost its gay lilt had this become the underlying theme of his poetry. No poet of “wine, women’ and song” could share Omar’s fascination with death. For the hedonist, eternity is an embarrassment.

We then have to accept the argument that a mystical poem has two levels of meaning. (So much of Persian poetry and the poetry of the East in general have this feature) – the literal and the hidden /implied.

The mystical interpretation is supported by J B Nicholas whose French translation appeared (1867) close on the heels of Fitzgerald’s English version. Fitzgerald himself makes a note of this in his introduction to the second edition: “M Nicholas,… has reminded me of several things, and instructed me in others, does not consider Omar to be the material epicurean that I have literally taken him for, but a mystic, shadowing the Deity under the figure of wine, wine-bearer etc. as Hafiz is supposed to do: in short, a Sufi poet like Hafiz and the rest… And there, is some traditional presumption, and certainly the opinion of some learned men, in favour of Omar’s being a Sufi- even something of a saint- those who please may so interpret his wine and cup-bearer.”

It is further observed that Fitzgerald faced the difficulty of interpretation when he found that some of the verses easily lend themselves to spiritual interpretation whereas others did not except in terms of materialism of hedonism.