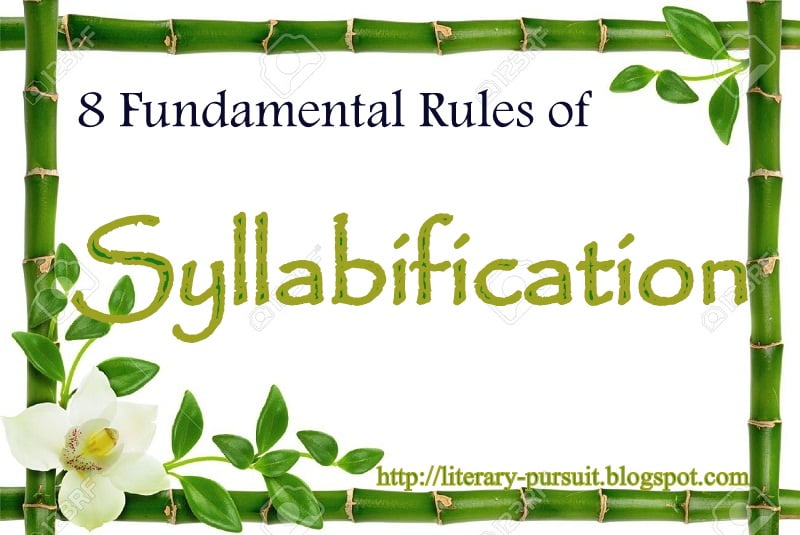 In my previous post on Prosody: Guide for the Beginners, we have got a small reference about many prosodic terms. Today, I am going to keep lens on Syllable so that you may get a broader vision about the ins and outs of it.

A syllable is a unit of pronunciation. It is a sound or combination of sounds produced at a single impulse of the voice. Its utterance is of course done by the vocal organs with a single push of air pressure from the lungs.

Syllable may consist of the following:

Syllables are of two kinds-

Thus we should divide ‘pe-ruse’, not ‘per-use’

—count the vowels in the word,

—subtract any silent vowels, (like the silent “e” at the end of a word or the second vowel when two vowels a together in a syllable)

—subtract one vowel from every diphthong, (diphthongs only count as one vowel sound.)

The number of syllables that you hear when you pronounce a word is the same as the number of vowels sounds heard.

The word “came” has 2 vowels, but the “e” is silent, leaving one vowel sound and one syllable.

The word “outside” has 4 vowels, but the “e” is silent and the “ou” is a diphthong which counts as only one sound, so this word has only two vowels sounds and therefore, two syllables.

3. In words ending in double consonants, the consonant should not be separated in syllabifying their derivatives–

4. Dissyllabic terminations that are sounded as one syllable should be so divided:

When there is only one syllable, you usually divide in front of it, as in:
“o/pen”, “i/tem”, “e/vil”, and “re/port”. The only exceptions are those times when the first syllable has an obvious short sound, as in “cab/in”.

7. Divide before the consonant before an “-le” syllable.

When you have a word that has the old-style spelling in which the “-le” sounds like “-el”, divide before the consonant before the “-le”. For example: “a/ble”, “fum/ble”, “rub/ble” “mum/ble” and “this/tle”. The only exception to this are “ckle” words like “tick/le”.

8. Divide off any compound words, prefixes, suffixes and roots which have vowel sounds.

Split off the parts of compound words like “sports-car” and “house-boat”. Divide off prefixes such at “un-happy”, “pre-paid”, or “re-write”. Also divide off suffixes as in the words “farm-er”, “teach-er”, “hope-less” and “care-ful”. In the word “stop-ping”, the suffix is actually “-ping” because this word follows the rule that when you add “-ing” to a word with one syllable, you double the last consonant and add the “-ing”.

Some debate still exists in respect of syllabification. ‘On the question of how syllables should be divided’, says Nesfield, ‘authorities are not agreed.’

For example ‘even’ is syllabified as either ‘e-ven’ or ‘ev-en’. In the same way ‘anklet’ is divided as either ‘ank-let’ or ‘an-klet’. My suggestion would go surely for an Authentic Dictionary to get rid of this trouble.