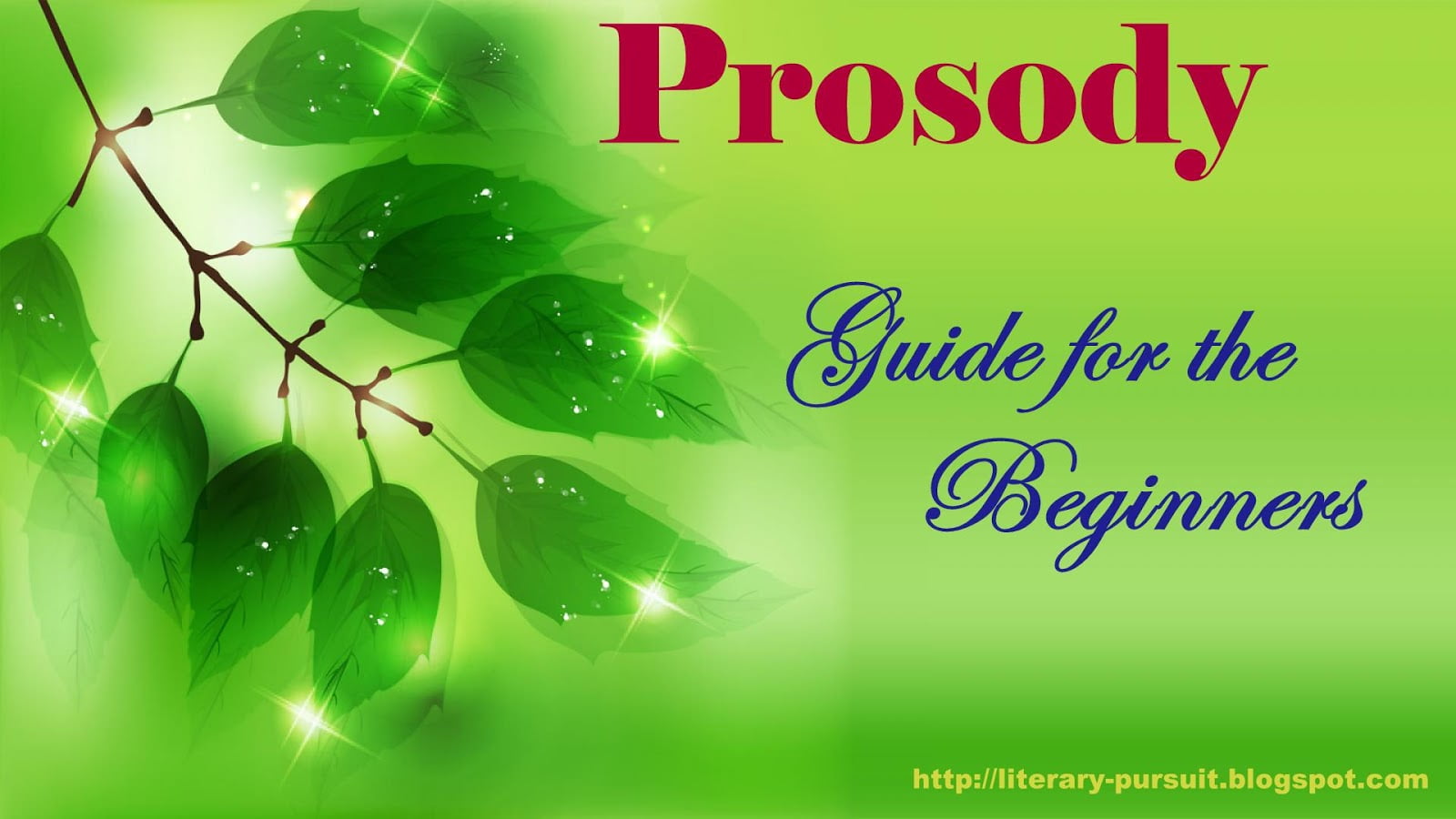 Prosody: Guide for the Beginners

Let us recollect once again Wordsworth’s worth-quoting line about poetry as “the spontaneous overflow of powerful feelings”. Poetry is an art by which the poet projects his feelings, thoughts and experiences on to an imaginative plane, by weaving some rhythmical words, to stir the emotions and imaginations. Edgar Allan Poe has beautifully defined poetry as “rhythmical creation of beauty.” Again, Watts Dunton has some voice as “Poetry seems to acquire not only intellectual life and emotional life but also rhythmical life.” Well, from the above discussion one thing is almost clear that rhythmical charm is the salt of poetry.

What are the differences between Poetry and Verse?

We all know that poetry is both imaginative and metrical composition. Poetry may be without rhyme and regular metre as in free verse. “Verse” is writing in which stressed and unstressed syllables are organised into rhythmic patterns. It refers a group of metrical composition, such as iambic verse. It has been rightly described as “a series of rhythmical syllables, divided by pauses and determined in script to occupy a single line.”

The word ‘prosody’ comes from ancient Greek, where it was used for a “song sung with instrumental music”. In later times the word was used for the “science of versification” and the “laws of metre”, governing the modulation of the human voice in reading poetry aloud. In modern phonetics, the word ‘prosody’ and its adjectival form ‘prosodic’ are most often used to refer to those properties of speech that cannot be derived from the segmental sequence of phonemes underlying human utterances. Without any hesitation we may justify prosody as “the grammar of verse” (Nesfield).

It is the study of the rhythm, stress, and intonation. Prosody has two branches-

Ortheopy (dealing with the quantity and accent of syllables, emphasis, pauses and tones).

Versification (dealing with the laws of metre).

Prosody, therefore, is concerned with the external framework of verse not with its internal thoughts.

Like music, poetry is attached with the modulation of speech. It is based on two elements- time and tone. While time is expressed by quantity, tone is presented through accent.

The unit of pronunciation is called syllable. A syllable is a sound or a combination of sounds which can be pronounced at a time with single force. It may consist of a full word or a part of a word.  A syllable depends upon a vowel sound no matter how many vowels are there. The number of syllables in a word is equivalent to that of vowel sounds.

Number of vowel sounds in a word = Number of syllables

Such as, the word ‘soul’ is a monosyllabic in spite of having double vowels, but only one vowel sound. Apparently the very word ‘beautiful’ is a tri-syllabic (beau-ti-ful), although there are five vowels.

Stress is ‘a strong or special exertion of the voice on one word, or one part of the word, so as to distinguish from another.” It is a generic name comprising both emphasis and accent, which are in fact, special type of stress.

The way in which our voice rises and falls while speaking is called intonation. It is the music of the language.

Accent is the stress or loudness of voice thrown upon a single syllable in pronouncing a word. It helps the particular syllable to stand out from the other syllable.

Example: for-GIVE, LOVE-ing (Accent are given on the capital part of the words)

Emphasis is the stress or loudness of voice deliberately thrown upon an entire word to distinguish it from another.

Example: Him I like, her I hate. Silver and gold I have none. (The italic words are emphasized)

Rhythm is the flow of sound resulting from the stress variations of the spoken language. The very word ‘rhythm’ originates from Greek ‘ruthmos’ which means ‘measured motion’ or ‘flow’.  It may be defined as ‘a recurrence of similar phenomena at the regular intervals of time’.

I am sharing with you an example: The DAYS / are COLD / the NIGHT/ are LONG

Here, each foot consists of two syllables, first one unaccented and the later one accented. Hence we may say that it is di-syllabic foot.

The term ‘metre’ comes from Greek ‘metron’ meaning ‘measure’. The arrangement of sounds in poetry into patterns of strong and weak beats is known as meter. In other words, Meter is the rhythmic, recurring pattern of accented and unaccented syllables. It can be used in prose and plays, though it is most commonly found in poetry. A piece of writing may contain several different types of meters, but there is usually a dominant pattern that follows throughout.

The metre is actually denominated on the basis of the nature of feet and the number in feet in a verse.

So we may say that the line is written in iambic tetra (four) metre.