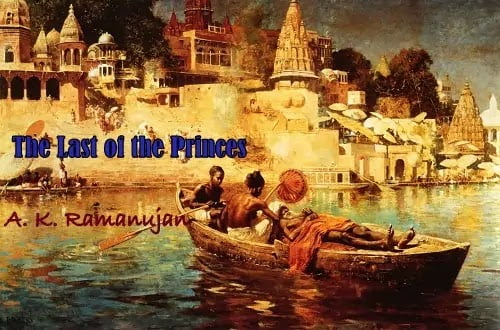 Irony and Pathos in Ramanujan’s The Last of the Princess

A. K.  Ramanujan’s celebrated poem, “The Last of the Princes” is a tragic commentary on the pathetic pen-picture of present plight of once-powerful princes. The law of history ever walks in its own way. In the ongoing flux of time many vast empires and many mighty emperors come and go. But few princes belonging to the royal dynasty still survive. They lead their lives amidst dire poverty and utter wretchedness. Once they were sitting at the zenith of power, pelf and pomp. But now they have nothing to cheer about. A sense of nostalgia of their ancient majesty pervades them. They now, only boost for their ancestral titles and half-dilapidated buildings. Under the debris of history, they search for a few pebbles of their past princely glory.

The poet takes the most powerful emperor, the Mughal Dynasty to exhibit the pathos in the mind of the readers. After the death of Aurangzeb, the last celebrated prince of the Mughal Dynasty, this mighty empire begun to decline. All the past glory was faded. The empire was divided into small regions. Gradually the British started overpowering on innocent Indians and on the then rulers. Their financial condition became worse. Some of the princes died of bone tuberculosis other of cold climate while they led their life in utter luxury in London. Some of them died of addiction of imported foreign liquor. They got married with the foreign girls. The native rulers considered it a status symbol to have white women as wife. There were quite a few rulers who met heroic death fighting against the British. Ballads have been written in praising their deeds. The princes lost their fathers, brothers, sisters, wives and their children.

Sometimes their charming sisters committed suicide hanging them on the ceiling unable to bear the molestations of some rogues. The women used to keep mynahs and parrots in the harem. Every one of them died and remained as a historical memory.

But the last of the princes still survives. The poet now nicely paints the physical conditions of them. He inherits long fingers, painting-like face and blind belief in snakes. He constantly coughs and sneezes. Phlegm comes out his mouth. His liver is not functioning well. Sometimes he suffers from loose motion and sometimes constipation. Now he is so poor that he finds it difficult to provide formal education to his daughters, Honey and Bunny. They go to school only on half fees. His wife puts on a pearl nose-ring as a symbol of their past glory.  All her heirlooms except the nose-ring have been sold to make ends meet. His eldest son is forced to take low-paid job as a trainee in the telegraph office. He has already telegraphed his father thrice for money. But his poor father is incapable to provide the demand for his dead-end condition.

An undercurrent of pathos runs through the entire poem. Ramanujan has ironically attacked the snobbish mentality of the last princes, their bad habits, their intoxication to imported wine and wife and their unpatriotic fervor.