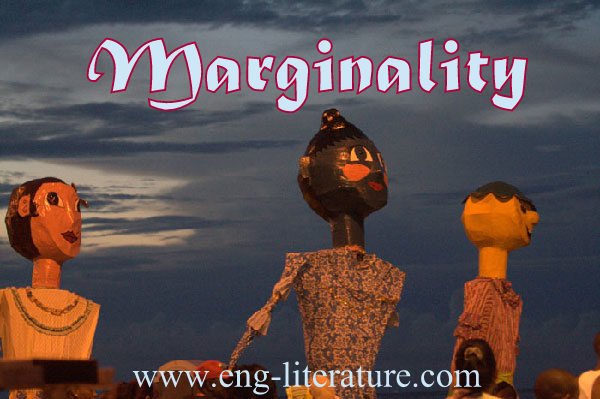 Social, economical and political inequality is a global phenomenon that produces the horrendous ignominy. The term ‘Marginality’ is generally applied to interpret and analyze socio-cultural, political and economic spheres, where underprivileged people struggle to gain access to resources, and equal participation in social life.

Likewise literature of Marginality is the literature that deals with the marginalized class of the world who are kept devoid of their fundamental rights to participate in the social, religious, cultural, political, educational and economic spheres of their lives and are kept aloof, alienated, or segregated physically from the general public called the sophisticated Hindu or the elite classes of the world.

Marginality expositarily unravels the strands how the marginalized classes live a miserable life and how even the developed and developing countries are unable to solve the issue of caste and untouchability in the era where every country is claiming to solve the economical, sex and caste-based discriminations and a large amount money is being consumed on these socio-economical backward classes. The superstructures of race in Africa, Australia, USA and caste in India inform, deform, and complicate the identities of the marginalized along lines of gender, class, and family structure.

Many postcolonial writers and theorists have challenged the representative claims to marginality of the elite or dominant classes in postcolonial cultures and societies. Marginality gets its root in India in the sphere of Dalit literature. The term “Dalit” means “those who have been broken and ground down by those above them in the social hierarchy in a deliberate and active way”. Untouchables, burst, split, scattered, dispersed, depressed or crushed classes, underprivileged, downtrodden, ground-down and Harijans are generally called Dalits.

The leading authors of Dalit literature in India are Mulk Raj Anand (Collie, Untouchable etc.), Om Prakash Valmiki, Munshi Premchand, Baburao Bagul and Mahasweta Devi (Aranyer Adhikar). Such a problem is articulated by the proletarian revolutionary character, Joseph D’Costa in Salman Rushdie’s novel Midnight’s Children , who says of India’s national liberation that ‘this independence is for the rich only’.

An Australian writer, Kim Scott, the descendant of the Wirlomin Noongar people, has his aboriginal roots and he has depicted his painful experiences, though an indirect way, in his books. He has won the Commonwealth Writers’ Prize and the Pacific for his bestselling book That Deadman Dance (2011).

Colour and race-discrimination and alienation are two equally forceful elements of Tony Morrison’s works. Her novel, Beloved is a heart rending tale of race discrimination.

Chinua Achebe’s novel Things Fall Apart presents a different idea on race, class and colour in the context of Africa, the Land of Darkness. Joseph Conrad’s Heart of Darkness also has the same undertones which is overlap between racial consciousness and identity. Aphra Benn‘s novel Oroonoko is another instance of marginality of literature.

Rapid globalization has changed human outlook over caste, creed and colour but it was still unable to bring economic equality among all classes.

2 thoughts on “What is Marginality in literature? How has it influenced the Post-Colonial literature?”