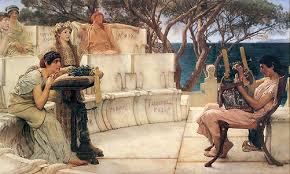 A lyric according to Oxford Dictionary is “the name for a short poem, usually divided into stanzas… and directly expressing the poet’s own thoughts or sentiments.” The definition mainly focuses on the subjectivity of a lyric, as to say it is the direct and “spontaneous overflow of powerful feelings.”. Debate still runs as to what should be dominant in a lyric thought or emotion. In a poem like Pope’s Essay on Man or Wordsworth’s The Prelude, or Gray’s Elegy written in a Country Churchyard, the main idea that the basic quality of a lyric is feeling rather than thought is out willed. Therefore, a lyric seems to come directly from the heart of the writer and goes straight to the heart of the readers.

A lyric is primarily concerned with the poets emotional mood and the feeling which oversteps thought is roused either directly by experience as in Keats’, Ode to a Nightingale, or indirectly through the activity of imagination as in To a Skylark which was composed in Rydal Mount where there is no skylark as the poet has himself admitted. Either directly or indirectly, the poet who experiences the emotional mood wishes to create an identical experience in the mind of the readers. A lyric, therefore, works in a way of reciprocation; it is the process of give and take, an exchange between the poet and the readers. The idea is better conveyed here:

“Right from the heart

Right through the heart of Spring.”

That a lyric is personal or subjective is more evident in the lyrical cry of Shelley in his Ode to the West Wind:

“I fall upon the thorns of life! I bleed.”

In such a poem the poem and his subject is perfectly intertwined. Even in his To a Skylark, the Skylark is none but Shelley himself. It speaks of Shelley’s soaring idealism. The Skylark searches for an ideal state leaving this world with its all earthly afflictions as Shelley seeks for his much fancied millennium. The rebellious role of the West Wind that sets both as a destroyer and preserver is again a powerful replica of the poets own rebellious spirit.

But to say a lyric is out and out personal is to say the half truth. No literature is universal unless it creates in it a mass appeal. Shelly’s personal despondency in “I fall upon the thorns of life! I bleed” has no appeal to the reader unless he touches upon the prophecy about the millennium to come-

If winter comes, can spring be far behind.”

Keats, a poet who has the badge of suffering cannot but be personal in his fancy to fly to the land of the Nightingale, which is free from the fever and fret of earthly life. The desire to be “half in love with easeful death” is the poet’s own personal thought. But it also contain his plaintive musing on the transitoriness  of all those things that human beings love and values:

Or new loves pine at them beyond tomorrow.”

Intellection plays a large part in the composition of poetry. Poets have to pass through a laborious process for giving “inspired truth” (G. B. Shaw) in poetry. They have to reason and feel their way to it. They have to suffer, pain of heart, distress, jilted in love affair and dire poverty. A poet has to hammer his brain in order to find out the right word for his feelings and appropriate image to exemplify his emotion and thought.

Modern poets like Ezra Pound, St John Perse, T. S. Eliot, Auden, and Dylan Thomas write lyric of ideas which combine musicality of form and richness of ideas. As a matter of fact, mere emotion can not make for good poetry. Value of poetic truth is as important as the value of emotions and music in poetry.

Though subjective note and the personal element is the soul of lyric, its universality can not be ignored. A close look at the beginning of literature shows us that poetry originated from the desire of the outward individuals. The Hebrew lyrics are strictly of this kind. Scholars have noticed that “I” and “she” in the psalms refer less to the individual singers but to the community of Israel with its traits and tribulations, hope and aspirations.

Thus, subjectivity in lyric poetry does not mean alone the poet’s own personal feeling. It is also an attempt to create an identical in the mind of his readers. The poet transmutes his own thought to a great one that transcends the time limit. If Wordsworth’s heart leaps up as he sees a rainbow in the sky, he will want that his readers should create in their heart the similar feeling for the rainbow like him-

“My heart leaps up when I behold

A rainbow in the sky;

So was it when my life began

As the poem ends, the poet’s individual “I” becomes the universal “thou” or “I” becomes a type of “all” as Hudson truly mentioned:

“ The majority of the world’s great lyrics owe their place in literature very largely to the fact that they embody what is typically human rather than what is merely individual or particular.”