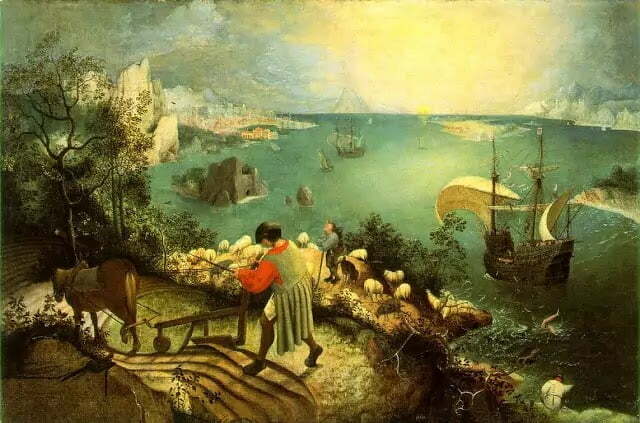 Donne lived during a time of great change; the challenge of new dogmas of religion as the power of the Catholic church giving way to reformers, the discovery of new worlds, the rise of empirical science… all giving rise to doubt.
Where, amidst such flux, was permanence to be found? The great love poems, such as “The Good Morrow” “The Sun Rising,” “The Canonization, exalt the lovers into monarchs–indeed, into deities of an alternative universe given coherence by their relationship.
When John Donne eloped with Ann More, her father urged Sir Thomas Edgerton to dismiss Donne and he spent two years in prison.  After his release, the marriage was ratified and for the next ten years John and Anne Donne lived in disgrace on the fringes of the court in poverty.  This poem can be seen as a rationalisation, a justification for their life – if they have each other, what need have they for anything else.  However, we should not assume the speaker is necessarily Donne or that he is serious. Like all his poetry, Donne is playing to the gallery and more interested in demonstrating his flair for language and the use of outlandish comparisons called Conceits.

As the sun represents the revered source of life, warmth and fertility, the pinnacle of the universe, the abrupt arresting opening lines, “Busy old fool, unruly sun” is decidedly impudent; to address the Sun in such a brazen shameless manner is defiant, impertinent, chiding, sassy or cheeky.  As the sun regulates time and seasons, it can hardly be unruly; yet to the unemployed, languishing lovers, time is not that important.

Also Read:
The tone appears harsh, scornful, contemptuous and patronising but jestingly modulates and becomes more reasonable and conciliatory even though his persuasive masculine arguments retain their mock commanding tone.
Donne’s distinctive voice pre-supposes an audience; either a woman or God; not necessarily us. Reading these lines aloud provides a sense of drama, immediacy with gestures of impatient contempt for this intrusion of their secluded love nest.  According to T.S. Eliot:
“Only Shakespeare can parallel the
variety and distinctiveness of the voices Donne created (something Browning
admired and imitated).”

As love makes the world go round, our love life can be more important than anything else. This poem represents the completeness and self-sufficiency of the two lovers.
“Must to thy motions lover’s seasons run?”
Lovers are somehow removed from the constraints of ordinary people.
“She is all states and all Princes, I
Nothing Else is.”
Donne claims their status equates to that of all royalty; an outrageous preposterous assertion.
Donne perceives the hollowness of pretenses of power, realizing that all outward show is merely vanity.  King James I, the father of Charles I, was a Stuart who succeeded Elizabeth I in 1603, staunchly believing in the Absolute Power of Monarchs and the Divine Right of Kings.  His delusional belief rested on the assumption that he equaled God.  Donne sees through this.

“All honour’s mimic, all wealth alchemy.
Thou, Sun, art half as happy as we,
In that the world’s contracted thus;”

The fact is that despite the social contracts, real life is often experienced at the level of ordinary existence rather than by vaunted authority.

This poem is jestingly combative and though the arguments appear far-fetched, they are pressed in a logical manner.

The life of lovers is compared to those condemned to find more pedestrian activities.

The regulated time of the outside world of school boys, apprentices huntsmen and ants; with the timelessness and freedom of lover’s world. The macrocosm of the spheres of the sun with the microcosm of their little world, which Donne cheekily claims is superior.
Also Read:
John Donne’s The Sun Rising as a Metaphysical Poem
Donne inverts the traditional hierarchies so that lovers outrank royalty and the sun.

Rags of time  – the seconds, minutes, hours compared to years, decades, centuries and epochs.  The trivia of work, contrasted to the significance of love-making.  Lovers are not governed by time; for them there are no deadlines.  Time is not important to them.
Woman’s eyes can out shine the sun. In a rare Classical Allusion, Donne refers to the sun standing still  both in Pagan myth (Alcmene) so Zeus can extend their love making and in Bible to Joshua so he can finish his battle against the Amorites.  (Joshua 10:13)
In the hierarchies of the universe, the sun rules supreme and yet Donne has the audacity to call it “unruly”, an impudent accusation, bold and striking.  It is usual in Love Sonnets to refer to the sun in respectful and dignified terms.
The sun is busy when they want to relax, it is old and doesn’t appreciate the joys and delights of youth and the sun is a fool for disturbing them.
Bed – we seem to be sharing a bed with the couple which he claims is the axis; the centre of the world.
Kings – Donne repeatedly compares himself favourably with the position of a King:
“Goe tell Court
huntsmen that the King will ride.”
“Aske for those kings
whom thou sawst yesterday
And thou shalt heare, All in one
bed lay.”
The poet comes full circle; at first rejecting the sun but in the end accepting it but on his terms.

The language is forceful yet colloquial with a few archaic terms:
Unruly   – difficult to control – can’t be ruled.
Saucy pedantic wretch – disrespectful lecturing fool.
Prentices – abbreviation of Apprentices, learning a trade.
Alchemy  –  ability to turn material into Gold – gradually being discredited by the rise of empirical science.
1.    Imposture or self deception
2.    Charlatan – self gulling dupes
3.    Elixir or philosopher’s stone

“Why dost thou thus…call on us?”
Playful note is evident in this line:
“Look and tomorrow late, tell me.”
(Don’t wake us up too early again tomorrow.)
Some words have changed their meanings or usage.
“Call county ants to harvest offices”
(chores?)
“Princes do but play us”    (imitate?)
“In that the world’s contracted thus”    (structured?)
Evaluation:
Many would consider this Donne’s signature (most representatives) poem for the sheer boldness of its presentation.
Is John Donne sexist in his approach to women?

“She is all states
and all Princes, I

This is perhaps Donne’s best achievement in playing the part of a libertine in asserting the supremacy of love over more pedestrian activities.