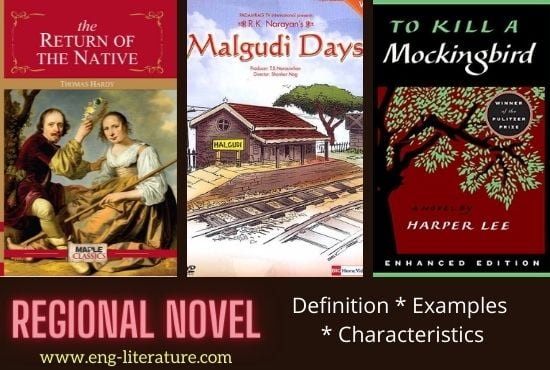 What is Regional Literature?

Regional literature is a fiction or poetry that focuses on the characters, dialect, customs, topography, and other features particular to a specific region. Inspired and influenced by South-western and Down East humor, between the Civil War and the end of the nineteenth century this mode of writing became prominent in American literature in particular. According to the Oxford Companion to American Literature, “In local-color literature one finds the dual influence of romanticism and realism, since the author frequently looks away from ordinary life to distant lands, strange customs, or exotic scenes, but retains through minute detail a sense of fidelity and accuracy of description”

“Literature that accurately seeks to portray or is associated with a particular geographic region or people is regional Literature. Often regional literature is set within a particular area and the writer or poet tries to capture the customs, dialect, behavior, and historical background of that region.”

Harper Lee’s To Kill a Mockingbird and Thomas Hardy’s Return of the Native are two examples of regional novels.

By ‘regional novel’ one can think about a fiction that is set in a recognizable region, and which describes features distinguishing the life, social relations, customs, language, dialect or other aspects of the culture of that area and its people. In this Fiction, a strong sense of local geography, topography or landscape is also included. In such writings a particular place or regional culture may perhaps be used to illustrate an aspect of life in general, or the effects of a particular environment upon the people living in it.

And one usually expects to find certain characteristics in a regional novel: detailed description of a place, setting or region, whether urban or rural, which bears an approximation to a real place; characters usually of working or middle-class origin although in some regional fiction people of these classes may be absent, and in a few the focus may be on a family or lineage and its connection with local landscape or history.(see the map of Hardy’s Wessex, the region where his writings revolve)

The major elements of regional novel are

In regional novels the emphasis is frequently laid on nature. Settings of such novels are frequently remote and inaccessible. The setting is usually integral to the story and may sometimes become character in itself. For example, we can take the works of R.K. Narayan’s Malgudi Days where the town of Malgudi is remote and inaccessible, full of natural surroundings and the setting integral to the story.

Local color stories or regional novels tend to be concerned with the character of the district or region. Here, characters may become character types, sometimes quaint or stereotypical. The characters are marked by their adherence to the old ways, by dialect, and by particular personality traits central to the region. In women’s local color fiction, the heroines are often unmarried women or young girls.

In the regional fiction the narrator is typically an educated observer. The observer is from the world beyond who learns something from the characters while preserving a sometimes sympathetic, sometimes ironic distance from them. This narrator serves as mediator between the rural folk of the tale and the urban audience to whom the tale is directed.

It has been said that “nothing happens” in regional fiction by women authors, and often very little does happen. Stories may include lots of storytelling and revolve around the community and its rituals. However this is not true in the case of Hardy’s fiction where plots are full of upheavals.

Many local color fictions share a common antipathy to change and a little nostalgia for an always-past golden age. But this is not applicable to all stories or fiction. A celebration of community and acceptance in the face of adversity characterizes women’s local color fiction. Thematic tension or conflict between urban ways and old-fashioned rural values is often symbolized by the intrusion of an outsider or interloper who seeks something from the community.

Harper Lee’s To Kill a Mockingbird and Thomas Hardy’s Return of the Native are two fine examples of regional novels.

Washington Irving’s famous story “The Legend of Sleepy Hollow” (1820) narrates several long paragraphs about the geography of Tarry Town and Sleepy Hollow on the legends that hung about the community. In Hindi, Maila Aanchal (The Soiled Border, 1954) of Fanishwar Nath Renu is a good example of regional novel. Besides all Hardy’s “Wessex novels“, are good examples of Regional Novels. The novels of William Faulkner are set in Yoknapatawpha County (Mississippi) and Raymond Chandler’s Los Angles are the urban examples or regionalism.

Ignazio Silone’s ‘Bread and Wine‘ (1936) or the novels, by Maria Edgeworth and Sydney Owenson, which are set in Ireland, and by Walter Scott in Scotland; or fiction by women writers, including Austen, Frances Burney, Edgeworth, Mary Shelley and others; or on novelists who engage with some of the political upheavals of the 1790s, such as William Godwin, Elizabeth Hamilton, Mary Hays, Thomas Holcroft and Mary Wollstonecraft are also regional novels to some extent.