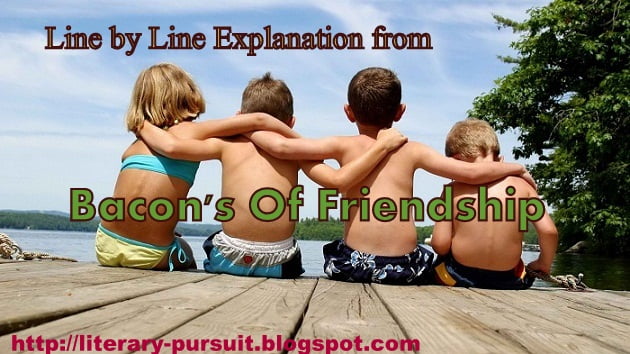 CONTEXT______This essay was
written at the special request of his friend Toby Matthew in commemoration of
an intimacy which had been tried by adversity and prosperity on both sides, and
endured to the end without cloud or interpretation either.
TEXT____IT HAD been
hard for him that spake it to have put more truth and untruth together in few
words, than in that speech, Whatsoever is delighted in solitude, is either a
wild beast or a god.
EXPLANTION_____Bacon
opens his essay with a grand statement modelled after the views of Aristotle.
Finding pleasure in solicitude is contrary to human character and mind. He
expresses his belief in rather strong words. Anyone, who shuns fellow human beings
and retreats to isolation, is degraded to the level of a wild beast. The other
possibility is that he is god.
*****
For it is most
true, that a natural and secret hatred, and aversation towards society, in any
man, hath somewhat of the savage beast; but it is most untrue, that it should
have any character at all, of the divine nature; except it proceed, not out of
a pleasure in solitude, but out of a love and desire to sequester a man’s self,
for a higher conversation: such as is found to have been falsely and feignedly
in some of the heathen; as Epimenides the Candian, Numa the Roman, Empedocles
the Sicilian, and Apollonius of Tyana; and truly and really, in divers of the
ancient hermits and holy fathers of the church.
Bacon, however, is not
totally dismissive of people who assiduously shy away from the crowd, and head
for the wilderness. Bacon realizes that remaining silent and cut off from
others helps the mind to engage in deep contemplative thinking. Through such
deep insightful dissection of mind, a person rediscovers himself. The truth and
wisdom that dawn on the meditator’s mind through such prolonged isolation, can
be profoundly rewarding for the hermit. The consequence can be both
questionable or desirable. In case of Epimenides the Candian, Numa the Roman,
Epimenides the Candian, Numa the Roman, Empedocles the Sicilian, and Apollonius
of Tyana, the theories they propounded were somewhat non-confirmist for the
commoners, but were of great philosophical value. Spiritual men who retreat
from public eye in and around places of worship have been instrumental in
delivering sermons of immense spiritual benefit to mankind. So, voluntary
abstention from society is not always a bad idea, after all.
*****
But little do men
perceive what solitude is, and how far it extendeth. For a crowd is not
company; and faces are but a gallery of pictures; and talk but a tinkling
cymbal, where there is no love.
One must learn to
differentiate between a crowd and kinship; between society and friendship. One
can be lonely inside a multitude too. Faces of people may turn out to be
fleeting pictures, if the persons are not engaged with. A conversation devoid
of passion or feelings may be akin to the sounds of a tinkling cymbal – a
barren monologue which hardly causes a ripple.
*****
The Latin adage
meeteth with it a little: Magna civitas, magna solitudo; because in a great
town friends are scattered; so that there is not that fellowship, for the most
part, which is in less neighborhoods. But we may go further, and affirm most
truly, that it is a mere and miserable solitude to want true friends; without
which the world is but a wilderness; and even in this sense also of solitude,
whosoever in the frame of his nature and affections, is unfit for friendship,
he taketh it of the beast, and not from humanity.
The Latin adage says,
‘Magna civitas, magna solitudo’. It means there is great solitude in a large
city. This is so because people live in areas separated from one another by long
distances. It makes it impractical to traverse such long distances to meet
friends and relations. The large size of the city is, therefore, an impediment
on the way of people cultivating friendship with one another. In a small city
or town, people tend to live at a shorter distance from each other. So they
befriend each other and live like a well-knit community.
*****