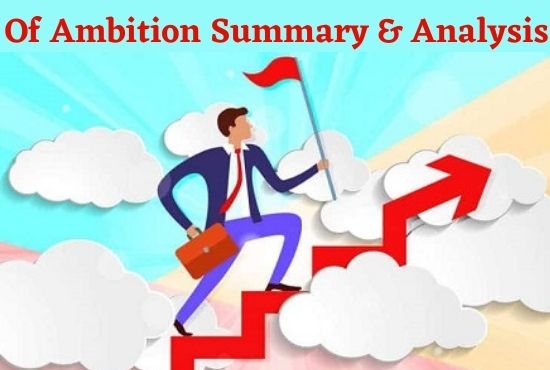 Of Ambition, an Essay by Francis Bacon

Of Ambition by Bacon Summary

Ambition makes men full of activity and diligence, if it is not checked. But when once it is checked, it makes men envious and malignant. So long as ambitious men continue to get opportunities of progress, they may be a little troublesome but they are not dangerous. But once they are checked and cannot fulfill their desires, they become inwardly dissatisfied and begin to envy others, and are happy when others fail. Therefore ambitious persons are worst suited for a king. If a king employs them, he should see that they constantly make progress and are never retarded in their progress. But it is very difficult to manage affairs in this manner, and therefore it is better not to employ such persons at all.

Ordinarily ambitious persons are to be avoided; but they can be employed when it is necessary to do so. There are three conditions in which ambitious persons are a necessity and should be employed. In times of war, a good commander should be employed even if he is ambitious, because his military skill makes up for his defects. Secondly, they can be used as a scapegoat and as a means of protection to the king. If the king wants to undertake some dangerous and unpopular action, he can easily do so through such ambitious persons who are always prepared to take the maximum risks. Thirdly, a king can make use of an ambitious person in pulling down some other person who has grown very powerful and who poses a threat to the king himself. Bacon cites the example of the Roman emperor Tiberius who used Macro to pull down Sejanus.

Ambitious persons may be pulled down and exposed to ruin all at once if they are of a weak and timid nature. I courageous it is not safe to try to pull them down suddenly. If, due to compelling circumstances, it becomes necessary to pull them down, the king should not do it all of a sudden, but he should start interchanging his favours and his disfavours, or his reward and punishments to them, so that ambitious persons are always confused and uncertain about their future positions.

There are many kinds of ambitions. The ambition to dominate in great matters is not so dangerous as the ambition to look personally even in small matters and minor details. An ambitious man who looks personally in small matters is not so dangerous as the one who has a large number of followers. A person who wants to excel among other able persons has a difficult task to accomplish, yet this feeling of competition is beneficial to the public. The most dangerous man is one who wants to dominate completely and reduce others to insignificance. Such a man causes great havoc and ruin in the times in which he lives.

There are three advantages of holding a high office; it gives opportunity of doing good to others, it gives an access to the king and other eminent persons, and it enables man to improve his own fortunes. The best wish is of doing good to others, and such persons are to be found out and employed. The king should find out and employ those who work for mere show, and those who desire to do good service rather than make personal profits.

Of Ambition by Bacon Analysis

(a) In war times a good general should be employed even though he is ambitious.

(b) Ambitious persons can be used as a scapegoat. A king can do dangerous and unpopular acts through them.

(c) Ambitious persons can be used in pulling down some other person who has grown very powerful and who poses a threat to the king himself.

(a) Those men are less dangerous who are of low birth and harsh nature and who have been newly raised to some high position.

(b) Ambitious men can be checked by being countered by some favourities.

(c) A counter-balance of power may be established by raising two or more ambitious men to equal ranks.

(d) The king should interchange his reward and punishments and keep ambitious men in doubt and uncertainty about their future positions.

(a) Ambitions to dominate in great matters;

(b) to look personally even in small matters and minor details. The first is less dangerous than the second;

(c) A person who has a large number of followers is very dangerous;

(d) A person who has the ambition to excel among able men has a difficult task to accomplish;

(e) The most dangerous is the ambition to dominate completely and reduce others to total insignificance and non-entities.

(a) It gives an opportunity of doing good to others.

(c) It enables men to improve their own fortunes.