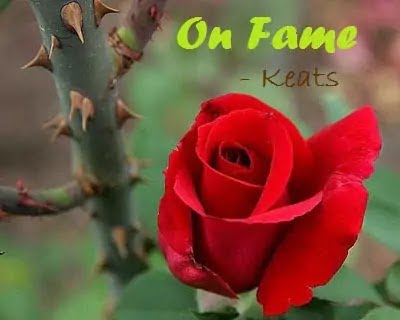 John Keats’ beautiful sonnet, On Fame refers to the contrast between the benevolent and graceful world of Nature and the pent up world of man vexed with the incessant pursuit of materialistic recognition and reward.

Very artistically, the poet has used a few imageries from nature to describe the condition of human being. A rose, the queen of all flowers has its sweet fragrance and magnificent beauty even though it lives on thorny places. The caress of gentle breeze and sucking honey of the wasp make it feel gratified. Our life would be beautiful if we dedicate our life for the service of others, by shaking off our false craving for reputation. But it loses all its beauty if it is plucked from the bunch. So things are quite good at their original place. Similarly, a ripe palm loses its ripeness and roundness if it is taken from the tree.

A lake enjoys it crystal water unless it is disturbed by the dark hand of Naiad, a water nymph. So far, the hard touch of worries and anxieties makes our life charmless, colourless and tasteless. The poem ends with a bold interrogative message why some narrow miscreants spoil their life in such a way.  Above all man should learn from Nature the true ways of attaining ultimate happiness and fulfillment and give up his narrow faith.

In Keats’ poem “On Fame”, Keats mentions fame, and compares it to a woman.  He also compares people’s want for fame to a man’s lust for a woman.  Keats’ begins by saying Fame is like a shy girl, and will be hesitant to follow those who try too hard to attract her attention; but will succumb to the humble boy who doesn’t try to “woo her with too slavish knees.”  Keats goes on to compare fame and popularity to a woman who doesn’t settle, a “Gipsy.”  The men who shame her for not pursuing them, and become spiteful of the woman, are compared to people who are all too concerned with their social prevalence.

Instinctively, man is always hankering after name and fame. He is never satisfied with worldly desire. The more he gets, the more his hunger increases. The thought of getting something more makes him restless. He becomes money and fame minded. He starts judging everything even the sweetest relationship in terms of money. That is the reason why he leads his life through the vast passage of worries and tensions. But man’s life in this mundane world is too short. In search of glory he cannot taste his blissful existence with exuberance of joy and happiness. He cannot drink life to the lees. At the end of his life’s journey he can realize that all his efforts to earn name and fame become vain and futile. Most importantly, we have to keep in mind that

“Our paths of glory leads but to death.”