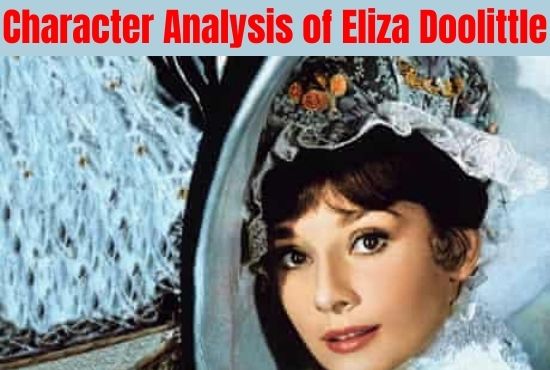 Eliza Doolittle is the daughter of a poor dustman who is living at the time with her sixth step mother. She earns her living by selling flowers. We are first introduced to her on a rainy and cold night, selling flowers at the corner of Covent Garden, Vegetable market, London.

“She is not at all a romantic figure. She is perhaps eighteen, perhaps twenty, hardly older. She wears a little sailor hat of black straw that has long been exposed to the dust and soot of London and has seldom if ever been brushed. Her hair needs washing rather badly: its mousy colour can hardly be natural. She wears a shoddy black coat that reaches nearly to her knees and is shaped to her waist. She has a brown skirt with a coarse apron. Her boots are much the worse for wear. She is no doubt as clean as she can afford to be; but compared to the ladies she is very dirty. Her features are no worse than theirs: but their condition leaves something to be desired, and she needs the services of a dentist.”

Her Poverty: The Touch of Pathos

Eliza is poor, and at the end of Act I of the play, we are given a peep into her poverty-stricken lodgings and the life of extreme financial difficulties that she is leading. This adds a touch of pathos to her character. She speaks cockney, i.e. a London dialect, so difficult to understand. But this poverty-stricken, shabby and unromantic girl is to become the heroine of the play, which is concerned entirely with her transformation into a lady who can pass even as a foreign princess in the garden party of an ambassador.

Eliza before Her Transformation

This transformation is brought about by Professor Henry Higgins, a Professor of Phonetics, by the pains which he takes over her for several months. She has an almost unintelligible manner of speaking English. She pronounces words in such a way, and speaks with such an accent, that even Professor Higgins is bewildered. She expresses her grievance or her resentment or her sense of injustice by ‘boohooing’ and by uttering certain incoherent sounds which betray her complete lack of education and her belonging to the lowest stratum of society.

But Eilza is a bold girl, who cannot be put down easily. In her first encounter with Higgins, she is as blunt in her speech as Higgins himself. When he asks her either to stop ‘boohooing’ or to seek the shelter of some other church, she replies: “I’ve a right to be here if I like, same as you”. When afterwards Higgins accuses her of being a liar, she says to him indignantly: “You ought to be stuffed with nails, you ought.” This spirit of defiance remains with her till the end.

Her Fondness for Showing Off

Eliza Doolittle is a girl who wants to show off and impress others. At the end of Act I, we are told that she goes home to Drury Lane by a taxi just to create an impression on Freddy. He has brought the taxi for his mother and sister, but they have already gone home by bus and so Eliza hires it. When the taxi-driver asks where she would like to be taken, her reply is: “Bucknam Pellis, where the King lives”. She tends to make it appear that she belongs to a higher status. When, subsequently, the taxi-driver asks if she has ever been in a taxi before, she replies with dignity: “Hundreds and thousands of times, young man”, although it is evident that she has never been in a taxi before.

An Important Source of Humour

In Act II, Eliza Doolittle becomes a source of great humour. She amuses us greatly by coming to the house of Professor Higgins and telling his housekeeper that she wishes to engage the Professor as her tutor to give her lessons in speaking English. She would pay the Professor his fee for the lessons. She again amuses us when, on being asked how much she proposes to pay, she replies that he should be satisfied with a shilling per lesson. “Take it or leave it”, she says in a tone of finality. It is her appalling ignorance of the greatness of Professor Higgins as a scholar that becomes the source of amusement.

Her Prudery and Modesty

Eliza Doolittle is shy, modest and a girl of good character. When Higgins instructs Mrs Pearce to take her into the bathroom, strip her naked, and scrub her body clean with a brush and soap, Eliza feels shocked because she has never before taken off all her clothes as she has never taken a full bath in all her life. She says to him angrily, “You are no gentleman, to talk of such things. I’m a good girl, I’m: and I know what the like of you are, I do.” A little later she says that she is going away because in her opinion the Professor is a crazy fellow and because she does not want a madman as her teacher. Nor is she tempted by Higgins’ offer of taxi-rides and diamonds. She tells him that she does not want any diamonds because she is ‘a good girl’.

We feel that she is really a good girl who values her chastity more than anything else. No temptation can persuade her to do anything unhonourable.

The Process of Her Education

However, soon she settles down and her education begins. She finds the lessons to be an ordeal. But she has a receptive ear and after a few months of training, she is put to the test at the house of Higgins’ mother. At this small social gathering, she speaks English very well and creates quite a sensation. When a reference is made to the possibility of the outbreak of influenza, Eliza gives an account of how her aunt was supposed to have died of influenza. She even makes use of the forbidden word, ‘bloody’, in her talk. However, all this is covered up by being called the new kind of small talk, and Clara soon imitates her.

After some more lessons, she develops into a highly accomplished and cultured lady. At an embassy reception, she proves to be a resounding success. Here her talk suits a lady of the highest rank. Besides, she now looks so attractive, graceful and well-dressed. All the guests at this reception stop talking in order to look at her, to admire her dress, her jewellery, and her majestic figure. Such is the impression created by her that Nepommuck, the Hungarian, is deceived into thinking that she is of royal blood and comes from his own country. Even the hostess says: “Oh, of course, I agree with Nepommuck. She must be a princess at least.” Pickering remarks that she has “won the bet ten times over”.

In this connection A.C. Ward writes,

In Act IV Eliza Doolittle is shown as a pathetic figure. Higgins is happy that his experiment of making a common girl a duchess is over. But Eliza puts these questions to Higgins and Pickering:

These questions are tragic questions, and they touch the hearts of the readers. Higgins does not want to marry Eliza on conscientious grounds. He thinks that his work of changing a common girl into a duchess is over. Both Higgins and Pickering cannot marry her, for they are “confirmed old bachelors”. She must marry somebody else. She feels a bit disappointed but then she takes courage and decides to marry Freddy who is in love with her. Thus she solves her problems in her own way.

A Round Three Dimensional Figure

Eliza Doolittle is the only character in the play that changes and grows under the stress of circumstances. She is a round three dimensional figure, like the heroines of Shakespeare. She develops an identity and personality of her own. This is clear from her defiance and from her throwing the slippers into the face of Higgins, because both he and Pickering have ignored her, though it has been as much an ordeal for her as for them. She is as much tired as they. She feels insulted at their neglect of her, and after divesting herself of her jewellery lest she be accused of theft, she leaves the house, passes the night wandering about in a taxi with Freddy whom she loves and proposes to marry, and in the morning she takes shelter in the home of Mrs. Higgins, the mother of Professor Higgins.

When she meets Higgins and Pickering at her house, she speaks to her old teacher and mentor in a cold and distant manner, saying: “How do you do, Professor Higgins ? Are you quite well ?” She greets Pickering more warmly, and says that not only Pickering had been generous to her with his money but that she had learnt good manners from the example set up by him. Her real education began on the day when Colonel Pickering addressed her as ‘Miss Doolittle’. His addressing her in that manner was the beginning of self-respect for her Moreover, the Colonel used to stand up whenever she came into the rooms and he used to open the door for her when she wanted to go out. The Colonel had been treating her as if she were a lady, whereas the Professor had always treated her as if she were still a flower-girl. When Higgins protests that his manners are in no way inferior to those of Pickering she replies:

“That’s not true. He (Pickering) treats a flower-girl as if she were a duchess.”

Eliza loves Freddy, but the story of their love and marriage has not been depicted in the play itself. It has been completed through an appendix which Shaw has added to the play. In this appendix, we are told that Eliza does get married to Freddy and, with the financial backing of Colonel Pickering, sets up a flower-shop where subsequently vegetables are also sold. We are also told that Eliza begins to live once again with Higgins and Pickering and that her husband also begins living in that household. By this arrangement, Eliza continues to render her services to Higgins to which he had become accustomed and for which she had become almost indispensable to him. The reasons for her preferring Freddy to the much older Higgins and Pickering are also explained. The Life Force instinctively prompted her to her choice, because Freddy would make a better father to her children than the two confirmed old bachelors. Thus Eliza Doolittle provides us with another illustration of the Life Force.