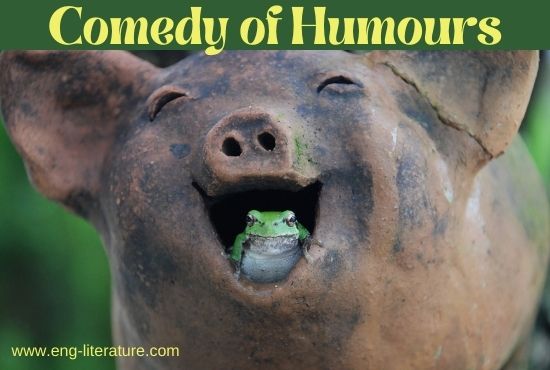 What is Comedy of Humours?

Comedy of Humours is quite opposite to romantic comedy which pictures man as dominated by one marked characteristic of some kind of whim. It was first cultivated in Gammer Gurton’s Needle and Ralph Roister Doister and Ben Johnson popularized it in England. In the comedy of humour, the characters are types and eccentrics while in Shakespearean comedy “there is rather an attempt to conceal the presence of the types under a semblance of personality.”

Comedy of Humours, according to A F. Scott, is a term applied especially to the type of comic drama written by Ben Jonson and John Fletcher, where humour is a personification of some ‘individual passion or tendency. It is a typical type of comedy which was first introduced by Ben Jonson. The term comedy is applied to works in which characters undegro embarrassment of misfortune, in which the action turns out well for the characters. Comedy of humours is one such variety of comedy

“Humour”, in the days of Renaissance, was a physiological term for the four primary fluids of human body, blood (sanguinary), phlegm, choler and melancholy. The temperament or the mixture of these humours was believed to determine a man’s physical condition as well as his temperament. A preponderance of one or another of the humours in a temperament was supposed to produce four types of disposition sanguine, phlegmatic, choleric and melancholy. In Ben Jonson’s comedies, each person is regarded as motivated by a preponderant humour, or a characteristic bias or eccentricity of disposition

When Jonson wrote his plays, the word ‘humour’ had a much more extended meaning than it has now the four humours of the body described by the old physicians were supposed to exert their influence upon the mind and in course of time, the mind as well as the body was credited with its own particular humour. It meant, at that time, predominant mental characteristics.

“The comedy of humours,” says Harvey, “is a term applied especially to the type of comic drama written by Ben Jonson, where a ‘humour’ is a personification of some individual passion or propensity.” His play Every Man in his Humour is a typical comedy of humours and we are introduced to a set of eccentrics. Each has his particular ‘humour, his prevailing mood or oddity. Jonson wishes to make humour the capital characteristic quality on which all other things depend

The fixed narrow limits of his fads were not common to the contemporary playwrights. Elizabethan playwrights give their ‘humours’, if at all, to only minor characters. Jonson gives these characteristics to all characters and especially the principal characters.

Characteristic Features of Comedy of Humours

Intense realism is the greatest characteristic of comedy of humours. The characters here do not escape into the dreamland of romance rather they tread into contemporary life with its manners, types, foibles and affectations. Ben Johnson cannot be forgotten because he freed the English comedy from the shackles of romantic extravagances of Beaumont and Fletcher. He also presented a real picture of contemporary England. The story of his comedies can be helpful to us in assessing the contemporary Elizabethan society.

The comedy of humour is didactic and satiric with the purpose of exaggerated eccentricities of their characters and to laugh the audience into good behaviour. This kind of comedy treats the follies and foibles of men and women in the satirizing manner to free them from their follies. Ben Jonson has used follies in characters to excite laughter and to ridicule them. A. Nicoll says,

“Realism, added to intensified ‘humours’ treated I a satiric spirit, was first given to the theatrical world by Jonson.”

The comedy of humour has no concern with the humour which abounds in Shakespeare’s comedies. It has wit and satire as the natural resultant of exaggeration of the types. A. Nicoll says,

“This lack of humour in the so-called comedy of humours marks one of the many anomalies in our literary nomenclature, due obviously to the rapid alteration in the significance of the terms employed by critical writers. It would be much safer to style Jonson’s comedy the comedy of realism or the comedy of satire, differentiating it thus from the romantic comedy of manners.”

All the three unities of time place and action are observed well here. The action is confined to one spot and it does not extend over the period of twenty four hours. In Jonson’s The Alchemist, all the incidents take place inside Love wit’s house or in front of its door and only in twenty four hours. The comedy of homour has classical cannon of having single plot without having any subplot there. It has no tragic motive.

Comedy of Humours Examples in Literature

Everyman in His Humour as a Comedy of Humours

Let us take an illustration. In Every Man in His Humour by Ben Jonson, there is an old man who is exasperated by worries because his son, a young poet, is sowing his wild oats. It is the father’s humour thus to plague himself, There is a merchant, whose humour is to be a jealous husband; thus young, self-confident country gulls exist; but to be jumped. An honest, optimistic magistrate has unshakeable faith in the virtues of a cup of sack and Babadil a blusterer of a new kind, takes away everyone in, by his decorous manners and the calm voice, in which he utters his improbable goals.

Jonson named dramatis personae aptronymically: Kitely, Dame Kitely, Knowell, Brainworm and Justice Clement (in Every Man in His Humour); Fastidious Brisk, Fungoso, Sordido, and Puntarvolo the vainglorious knight, and so forth (in Every Man Out of His Humour).

“In fact, it is the mirror of manners and habits of the time in the exhibition of the home, the home life and the street life of the people both the useful and the useless members of society are depicted. The varieties of fashionable and unfashionable costume, the early hours, the life of inns and the different foods were all brought before our eyes .The life, very conversation, full of oaths, finds place in the comedy of humours.”

The common situations are also worked out just as in any other comedy, but only with this difference that all comic situations arise out of the humours of the individual characters.

This typical type of comedy is full of contradictory elements. For example, the highly exaggerated, and therefore, unrealistic characters move about in highly realistic atmosphere and true to the custom of the society; the turns of speech and the social peculiarities are realistically brought out in a comedy of humours. In other words, a comedy of humours, has all the characteristics of a regular comedy, with the exception of the exaggerated traits or humours of its characters.