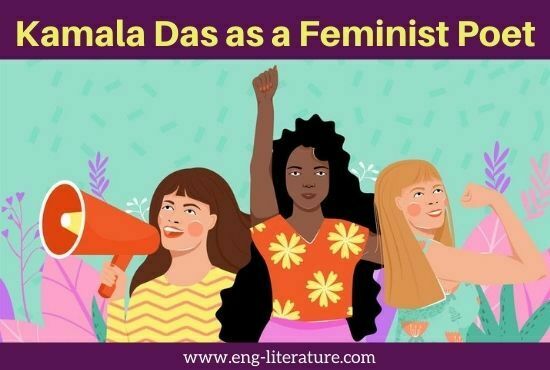 Kamala Das as a Feminist Poet

The poetry of Kamala Das has justly been labelled as confessional  or feminist poetry, but it may, with equal justice, be labelled as the poetry of protest. The bulk of her poetry consists of her confessions with regard to the failure of her marriage, her vain search for love and affection by forming sexual relationships with other men, her giving free reins to her sensuality till love became a “swivel-door” with one lover going out of her bedroom and another coming in. Now, this confessional poetry is the poetry of protest in the sense that it conveys Kamala Das’s strong and vehement disapproval of the way in which women in India have been treated for ages and ages.

Kamala Das may be regarded as a champion of the rights of women and as a strong supporter of the movement for the liberation of women from the chains of slavery to men. When Kamala Das wrote these poems (in the sixties and seventies of the twentieth century), the movement for women’s liberation from male domination was in its initial and intermediate stages, though today the success of that movement has gone beyond the wildest dreams of women themselves.

Today the Indian woman is as liberated as her counterpart in Britain and the U.S.A.; but, at the time Kamala Das wrote her poetry, the Indian woman was subservient to her parents or her husband, while the question of having extra-marital relationships did not arise at all. Kamala Das was among the foremost women to claim such freedom; and she was one of the very few who attained this freedom and exercised it to the fullest possible extent.

Reason Why Kamala Das is a Feminist Poet

Kamala Das’s marriage proved a failure because her husband treated her merely as a means of providing himself with sexual gratification while giving her no real love or affection. She has described her husband’s unemotional and mechanical way of performing the sexual act with her thus undoubtedly satisfying her sexual urge but denying to her the love and affection which every woman expects from her husband and the want of which brings not only disappointment to her but also misery and even torture. These poems describe not only Kamala Das’s own resentment against her husband but, by implication, the resentment of other women who find themselves in a similar predicament.

Feminism in An Introduction and Glass

In the poems, which express Kamala Das’s strong dissatisfaction with her conjugal life, she has protested against the passivity and the timidity of the Indian woman and against her subservience to her husband. An outstanding poem in this respect is the one entitled An Introduction. In some of the most resentful lines in this poem, she writes that her husband surely did not beat her in the course of the sexual act but that her body yet felt badly beaten, and that the very weight of her breasts and womb crushed her.

In poem, entitled Glass, Kamala Das complains that a man, wanting to perform the sexual act with her, had drawn her towards himself rudely and hastily, treating her as “an armful of splinters”. That man’s behaviour, she says had hurt her and caused her much pain, so that she had felt like broken glass.

Liberty of Love Making for Woman

The poem entitled In Love expresses Kamala Das’s dilemma in relation to a man who had made love to her in a manner which made her wonder whether there was any real love or affection in his sexual act or whether it was an act prompted by a purely physical desire. Perhaps the man’s seeming love for her was only a “skin-communicated thing”. Here, once again, Kamala Das is protesting against the attitude of lovers who seem to be fervent and passionate in their love-making but who actually feel no love at all for the women with whom they perform the sexual act.

Feminism in The Sunshine Cat

The Sunshine Cat is, beyond doubt, a poem of protest. Here Kamala Das feels so resentful of her various lovers that nothing but tears can bring her any relief, and so she lies in her bed, weeping. She would now “build walls with tears”: and at the end she feels as if she were a half-dead woman, now of no use at all to men.

A Freak, Flaunting a Flamboyant Lust

The Freaks too is a poem of protest. Here the very way in which a lover makes love to her disgusts her, and she feels that her heart is an empty cistern waiting to be filled only with coiling snakes of silence. She calls herself a freak; but she does so in her state of desperation, adding that she flaunts, at times, a grand, flamboyant lust only to save her face. Thus we can safely assert that the spirit of protest or revolt against the conventions of society permeates and saturates her poetry.

According to this critic, Kamala Das’s poetry is the poetry of protest, of anguish, of disgust, of despair, and of bitterness. Her poetry, says this critic, articulates without inhibitions the hurts it has received in an intensive, largely man-made world. She may be said to have heralded a kind of new morality where the time-honoured virtues of submissiveness, chastity, and dependence on men have been discarded. The new woman of Kamala Das’s kind is out to demolish the concept of male domination and his egoistical superiority over her.

In a poem entitled A Losing Battle, Kamala Das says that men are worthless and that to trap them a woman should use not love but the cheapest bait of all. This pleading for women’s liberation from male domination is even more aggressive and uninhibited in a poem entitled The Conflagration. Here Kamala Das asks women if to lie beneath a man in bed constitutes happiness, and she then urges women to come to life by asserting their independence because this world extends a lot beyond a lover’s or a husband’s six-foot frame.

Kamala Das’s Advocacy of the Right of Women to Independence

Kamala Das’s poems of protest against the conventions of society and against the restraints and restrictions which husbands or society in general impose upon women imply not only her pursuit and her attainment of the freedom to act just as she likes but also her advocacy of the right of all women to enjoy such freedom. Her tone of resentment and indignation in these poems certainly shows her own sense of injustice against the social order but it also stresses the desirability and the need of the recognition of the claims and rights of the Indian women in general. Thus Kamala Das may be described as a feminist, and a forceful and vehement feminist.

Kamala Das’s spirit of revolt against male domination and her feminism find expression in several poems besides those which have already been named above. As already pointed out, Kamala Das is iconoclastic in her approach to marriage. She treats marriage as a game of cruelty on the part of a husband. Her female ego comes to the surface when she ruefully depicts her loss of liberty through marriage. In the poem entitled Of Calcutta, she exposes the intricacies of her inner pangs caused to her by her husband. Her husband, she says in this poem, treated her as a “walkie talkie” to warm his bed at night. She felt that she had been reduced to a trained circus dog, and she asks:

“Where is my soul,

My spirit, where the muted tongue of my desire?”

She regards her marriage as a chastisement and a punishment, with her husband being the scourger. In The Stone Age, she laments the loss of her identity through marriage. Her female ego cannot tolerate male domination, and so she raises a voice of protest, sharply defining the gulf between the two worlds, one masculine and the other feminine.

In the poem entitled The Descendants, she asks if it is any happiness for a woman to lie beneath a man for the sexual act, and points out that the world extends a lot beyond her lover’s six-foot frame. She intends to escape from this prison into a world of new love and infinite ecstasy.

In the poem entitled The Prisoner, she says that she must find an escape someday  from the snare of a husband’s or lover’s physical attractions. In another poem she says that she would someday leave the cocoon which her husband or lover has built around her, and would someday take wings and fly around like petals of flowers flying around.

Thus almost all the poems of Kamala Das are poems of protest and exert a strong message of feminism in confessional tone which labeled her as a staunch feminist poet.