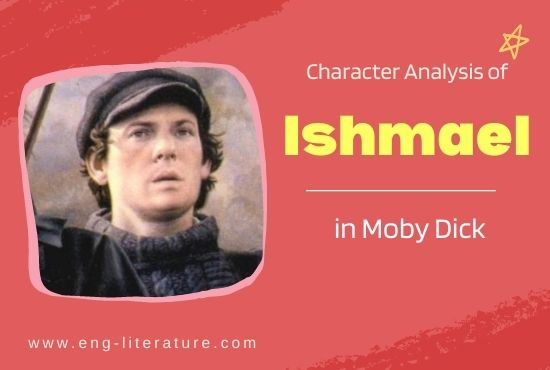 Like Ahab, Ishmael is also a Biblical character. Ishmael represents the image of the lonely wanderer. When Abraham turns Ishmael and his mother out of his house, they wander destitute in the desert. They become thirsty and God provides them with a spring in the desert to slake their thirst. The sufferings of Ishmael and Hagar qualify them for God’s race in the end. In the same way the wander-thirst of Ishmael of Moby Dick is quenched by his signing up to join the crew of the Pequod. It is also the whale of a thirst for adventures. In the end, he merits God’s grace and becomes the lone survivor after the destruction of Ahab and the Pequod. The ship, Rachel, searching for her missing crew picks him up.

Ishmael tells us that he was a schoolmaster before becoming a sailor. But he must have been an extraordinary schoolmaster for he is very knowledgeable on various cultures, scriptures, and peoples. He is well acquainted with the classics and has a contemplative cast of mind. In this respect also, Moby Dick has an autobiographical element, for the author, Melville, like the narrator, Ishmael, was a schoolmaster for some time. Ishmael has a poet’s sensibility, a story-teller’s narrative skill, a playwright’s stage-sense, a philosopher’s speculation and reasoning, and a sage’s proclivity for contemplation. Look at his sweet reasonableness in the following passage:

“I was a good Christian; born and bred in the bosom of the infallible Presbyterian Church. How then could I unite with this wild idolator in worshiping his piece of wood? But what is worship? Thought I Do you suppose now, Ishmael, that the magnanimous God of heaven and earth-pagan and all included- can possibly be jealous of an insignificant bit of black wood?” (Moby Dick, p. 67).

Therefore he joined Queequeg in his worship of the idol. He is liberal in his thinking and respects all cultures and religions. His contemplative nature can be seen at its best in chapter 35, called “The Mast-Head”. Ishmael stands guard on the mast-head, a hundred feet above the silent decks. It is a delightful prospect for a “dreamy meditative man” He may be lulled into a reverie and forget all about whales:

“…at last he loses his identity; takes the mystic ocean at his feet for the visible image of that deep blue, bottomless soul, pervading mankind and nature, and every strange, half seen gliding beautiful thing that eludes him; every dimly discovered, uprising fin of some undiscernible form, seems to him the embodiment of those elusive thoughts that only people the soul by continually flitting through it. In this enchanted mood, thy spirit ebbs away to whence it came; becomes diffused through time and space; …” (Moby Dick. pp. 162-163).

Ishmael speaks like a transcendentalist philosopher here with phrases like ‘bottomless soul pervading mankind and nature’, and ‘every uprising fin’ seeming to be The embodiment of those elusive thoughts’ and the spirit ebbing away ‘to whence it came becoming ‘diffused through time and space’. But elsewhere Ishmael mocks at the transcendentalists’ views using irony, humour and satire.

The mast-head look-outs are like Transcendentalists. They are lost in their meditations. Even the uprising fins of sharks and whales cause fanciful thoughts in their minds. In their absent-mindedness and metaphysical preoccupations, they miss the whales, to find which they take their positions at that height. Similarly the Transcendentalists miss the reality in their idealistic preoccupations. Thus Melville seems to make fun of the Transcendentalists through Ishmael; or is it Ishmael, the first-person narrator, who is making jokes at the expense of the Emersonians, while the omniscient narrator takes over and tells us about things Ishmael might not be aware of, from time to time? Ishmael, thus, is instrumental in making the ambiguity and ambivalence of meaning, sometimes multivalence of meaning, possible.

Ishmael loves the sea ardently and every page of Moby Dick is like a wave of the sea and the novel is a sea of wonders. The sea is a world of wonders for Ishmael and, through his narration, for us also. When Ishmael gazes at the sea from the mast-head or elsewhere, the sea is more than the sea.

Ishmael is a narrator with a difference. He mixes profundity of thought with his narrative. He makes us think with him. He starts as a first-person narrator but as the story unfolds and expands, his narrative perspective also expands and changes into that of a third-person omniscient narrator. At times, it is just the voice of an all-knowing narrator. It is difficult to say whether this is a flaw in the narrative technique or an artistic innovation. But when we consider the vast canvas Melville worked on, it appears that this kind of transition is inevitable.

Ishmael is a natural thinker who associates truth with the sea. In this context we have to mention the sailor called Bulkington whom Ishmael meets at the Spouter Inn in New Bedford and who later becomes his fellow-sailor on the Pequod. Ishmael is so much impressed with him (chapter 3) that he devotes a whole chapter to him, twenty chapters later. This dedicated sailor has completed a dangerous four year voyage only to push off again without any rest for another tempestuous term as a member of the crew of the Pequod.

Ishmael’s discipline and sense of duty are remarkable. while he maintains his independence of thought and spirit, obeys orders and performs his duty to the best of his ability. He is a great observer of life, men, and manners, and records his observations in the most readable fashion.

Like all thinking men, Ishmael enjoys his lonely eminence on the mast-head even though he is part of the community on the Pequod.